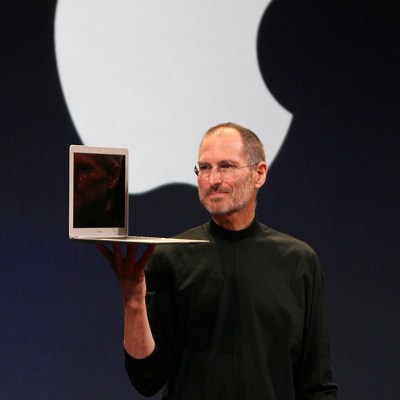 Source: By Matthew YoheMatt Yohe at en.wikipedia CC-BY-3.0, from Wikimedia Commons
The story is well-known by now. Conception, loss, return and ultimately personal and professional redemption. The way that Steve Jobs triumphantly came back to Apple Inc. (NASDAQ: AAPL) and former National Semiconductor CEO Gil Amelio was sent packing is legendary. The man who first popularized the personal computer returned to the company he founded and changed the way that the world heard music and the way that the cellphone was regarded, and forever changed the dynamics of technology as we know it. Unfortunately, more and more, it appears that his dynamic and progressive vision and leadership, is sorely lacking and missed.

On what would have been his 59th birthday, and almost two and almost two and a half years after his death, the vision that was Jobs’s baby is caught in a rut and spinning its wheels. With nothing new productwise to give the marketplace the usual jolt that started with the iPod in 2001, the company continues to just churn out version after version of the same old products. Sure the hardcore Apple aficionado is going to line-up for the next iPhone and perhaps the next iPod, but the breakthrough product continues to elude the company, and Jobs’s hand-chosen replacement, Tim Cook, has got to do something to turn the ship around. Even worse, the sluggishness comes as Apple rivals Samsung Electronics and Google circle its core businesses.

Cook touts Apple iPhone sales in emerging markets and the huge deal with China Mobile as progress. It is, but given the mammoth size of the company, it takes much more than that to drive revenue growth. Long-standing rumors of a profit-spewing Apple television have failed to materialize, despite Jobs’s own words in Walter Isaacson’s biography saying, “I’ve finally cracked it.” Various iPad shapes, sizes and designs continue to be dogged by vicious competition, bent on grabbing a share of the same market.

“We are really happy with our record iPhone and iPad sales, the strong performance of our Mac products and the continued growth of iTunes, Software and Services,” said Tim Cook, Apple’s CEO. “We love having the most satisfied, loyal and engaged customers, and are continuing to invest heavily in our future to make their experiences with our products and services even better.”

Tim Cook may be happy, but the bottom line for shareholders has been dismal since the stock peaked, closing at $702.10 on September 19, 2012. What followed was a massive sell-off that took the stock down almost 45% in seven months. Sure there has been a strong rebound since then, and that is great if you were a buyer in April 2013, but the problem seems somewhat systemic. Worst of all, the Steve Jobs hype, glow, persona is gone, and gone for good.

Activist investor Carl Icahn got involved, using Twitter as a bully pulpit to get the company to buy back stock and increase the dividend. On February 10 in a letter to Apple, Icahn backed off from his non-binding proposal trying to force the company to add another $50 billion to its stock buyback program. He acknowledged Cook’s announced $14 billion buyback was close enough to his stock repurchase targets. However, the withering rhetoric from the bellicose Icahn can take its toll, even on the toughest CEOs. It surely stands out in the financial media.

Jobs resigned from Apple a short two months before his death in August of 2011. The sheer determination that he brought to the company was the kind of stuff legends are made of. The incomparable vision, leadership and business acumen, combined with his keen awareness of what the consumer would do if pushed in the right direction, has led to comparisons of the man to Thomas Edison and Henry Ford.

So where does Apple go from here. Details emerged recently of a meeting last year between Apple mergers chief Adrian Perica and Elon Musk of Tesla. While Musk said that an acquisition is not out of the question, that certainly does not solve any immediate problems at Apple. Mirroring Microsoft from 2000 through 2010, Barclays analyst Ben Reitzes says Apple’s valuation will be challenged as it aims for the next product home run. He downgraded Apple to Equal Weight from Overweight. Protracted product droughts are bad, and Reitzes sees nothing in the Apple pipeline that is a new iPhone or iPad.

In the end, as the “Internet of Things” continues to pick up speed, Apple like its competitors will look to everything from converged media and Apple TV, to online payments and geo-location. Acquisitions may start to have a bigger presence as the company uses its gigantic cash trove to acquire the technologies and ideas to forge ahead. The one thing the iconic Silicon Valley firm can never acquire again is the magic that was Steve Jobs. That is gone with the wind.