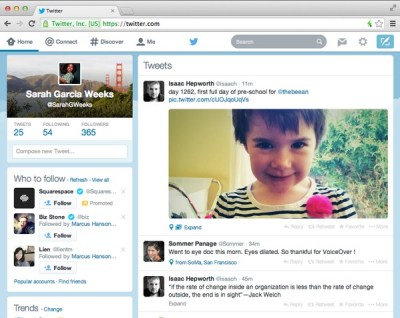 Source: courtesy of Twitter
With the stock market fighting just to be even for the year and with so many disappointing fourth quarter earnings reports, many investors that look for growth are having a difficult time finding solid ideas. A new research note from the Internet team at Deutsche Bank looks at top stocks in which there can be substantial mean-reversion for 2015. In other words, they like market leaders that have traded down or sideways to reverse that trend as this year unfolds.

Despite the market’s early 2015 volatility, it still trades near the highs on all the indexes. Aggressive tech growth investors may do extremely well with the three Deutsche Bank Internet stocks to buy that may have more upward price mobility.

Amazon.com Inc. (NASDAQ: AMZN) had a very difficult 2014, with everything from bad earnings to CEO and founder Jeff Bezos spending huge amounts of money to open up product silos for the Internet retail giant. The Deutsche Bank team feel that the company has numerous catalysts for 2015 and is right at the top of its mean-reversion trade ideas. The analysts cite lower fuel pricing helping shipping costs, easier comparisons from the AWS price cuts, project rationalization on costs and a general solid tone to the huge retail online business.

The Deutsche Bank price target for the stock is $350. The Thomson/First Call consensus price target is set higher at $357.21. Shares closed up nicely on Friday at $312.39.

Facebook Inc. (NASDAQ: FB) seems on the surface a stock that everybody on Wall Street is enamored with. The reality is, and the analysts point this out, the stock has essentially traded sideways since last summer. They also think the muted stock performance since March 2014, coupled with potential modest upward estimate revisions, should be enough for Facebook to move up despite Wall Street’s tentative view of fourth-quarter earnings. With the company poised to become even bigger in the digital online advertising space, the Deutsche Bank view remains bullish.

The Deutsche Bank price target for the social media colossus is $90, and the consensus target is $89.18. Shares closed trading on Friday at $77.83.

Twitter Inc. (NYSE: TWTR) is the epitome of the Deutsche Bank mean-reversion trade thesis. The stock has become a Wall Street whipping boy for any number of reasons: high multiple valuation, issues with the current CEO’s performance and overall terrible negative market sentiment. The Deutsche Bank analysts believe the company is improving the core products, and the stock is heavily under monetized, and those types of trades tend to work themselves toward higher valuations. Twitter flat out could be one of the best mean-reversion ideas for 2015, and it is also considered a possible takeover candidate by some.

The Deutsche Bank mean-reversion stock trade ideas are designed for accounts that are aggressively growth oriented and can tolerate higher volatility. The good thing is all the ideas have solid upside potential and very possibly less downside potential than other tech trades.