How Intel and Micron Want to Dominate NAND 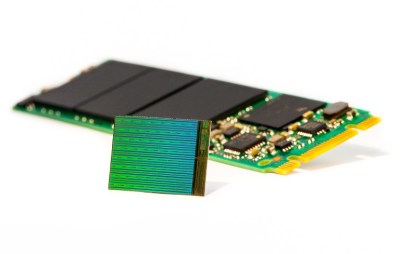 Source: courtesy of Intel Corp.
New developments in flash memory may have colossal implications within the semiconductor industry as a whole, especially because it is a collaboration between two giants in the industry. Micron Technology Inc. (NASDAQ: MU) and Intel Corp. (NASDAQ: INTC) announced Thursday the next big step in their collaboration in flash and NAND technology. The companies revealed the world’s highest density flash memory.

This new 3D NAND technology was jointly developed by both companies. It stacks layers of data storage cells vertically to create storage devices with three times higher capacity than its competitors. Ultimately, this enables more storage in a smaller space, resulting in significant cost savings, low power usage and high performance to a range of mobile consumer devices, as well as the most demanding enterprise deployments.

Considering that Planar NAND flash memory is approaching its practical scaling limits, the implication is posing significant challenges for the memory industry. As a result, 3D NAND technology is poised to make a dramatic impact, aiming for continued performance gains and cost savings, driving more widespread use of flash storage.

It is also this collaboration that could keep pressure on SanDisk Corp. (NASDAQ: SNDK) and other companies in the semiconductor industry involved in flash memory. Of course it goes without saying that Micron and Intel will have to deliver better products, but the two companies do have extensive experience and could be disruptive to other companies in the field. SanDisk in particular is feeling the heat Thursday, as it also had its guidance reduced yet again.

Brian Shirley, Vice President of Memory Technology and Solutions at Micron, commented on the potential impact:

Micron and Intel’s collaboration has created an industry-leading solid-state storage technology that offers high density, performance and efficiency and is unmatched by any flash today. This 3D NAND technology has the potential to create fundamental market shifts. The depth of the impact that flash has had to date — from smartphones to flash-optimized supercomputing — is really just scratching the surface of what’s possible.