Microsoft Moves Away From Shadow of Gates, Ballmer 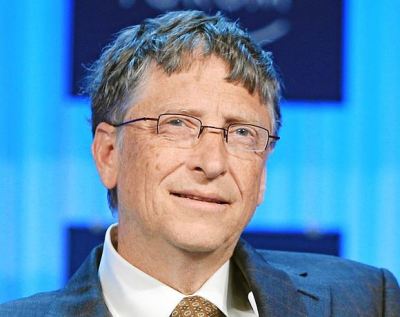 Source: By World Economic Forum (Flickr) CC-BY-2.0, via Wikimedia Commons
It has been over a year since Steve Ballmer left Microsoft Corp. (NASDAQ: MSFT) after his decade-long reign as chief executive. Bill Gates no longer sits in the chairman’s chair of the company he founded. The new CEO, Satya Narayana Nadella, has started to shift Microsoft’s core business toward the cloud. For the time being, he has been successful.

Figures for Microsoft’s most recently reported quarter show that Nadella is far along from the period when the Windows operating system for personal computers (PCs) was the company’s primary business, supplemented some by its Xbox franchise. Revenue rose 6% to $21.7 billion. Earnings dropped 10% to $0.61 per share. Some of the drop was due to restructuring. The effects of the cloud were front and center:

Commercial cloud revenue grew 106% (up 111% in constant currency) driven by Office 365, Azure and Dynamics CRM Online, and is now on an annualized revenue run rate of $6.3 billion

ALSO READ: Companies With the Largest Stock Buybacks of All Time

It will not be long until commercial cloud revenue brings in 10% of Microsoft’s revenue. Additionally, in the quarter Nadella benefited from Microsoft’s buyout of Nokia. Revenue from phone hardware was $1.4 billion, compared to zero from the period a year earlier, when Microsoft did not own Nokia.

Granted, cloud computing, the Surface PC and the phone business were part of Ballmer’s late-stage period as CEO. Nadella plans to push Microsoft’s cloud initiative harder and into the consumer computing realm:

Customers continue to choose Microsoft to transform their business and as a result we saw incredible growth across our cloud services this quarter. Next week at Build we’re excited to share more about how we’re empowering every individual and organization on the planet to achieve more with the next generation of our platforms.

The planet is a big place, but Microsoft conquered it with Windows over a generation ago. Nadella wants to perform similar magic via the cloud.

Nadella has at least another year before investors become anxious about the success of his plans. Microsoft traded at $60, when the Nasdaq reached its high in December 1999. It traded at $50 again recently. Some of the improvement has to be credited to the overall rise in the stock market. The cloud should move shares back to their 1999 highs. If that does not happen, Nadella’s transformation of Microsoft will be measured against Ballmer’s. For the time being, though, he is his own man.