IBM Leads Development of Tiny Chip, but Dumps the Factory to Build It 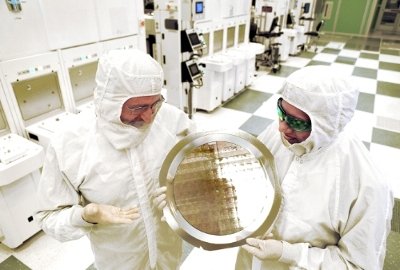 According to the company, the alliance with Globalfoundries, Samsung and others achieved a scaling improvement of nearly 50% over the currently most advanced technology, as well as introducing silicon germanium (SiGe) channel transistors and extreme ultraviolet (EUV) lithography integration. IBM believes that the techniques and scaling could result in a 50% power-to-performance improvement in next generation mainframe and systems that power big data, cloud and mobile computing.

It is, perhaps, ironic that IBM had to pay Globalfoundries $1.5 billion to take ownership of Big Blue’s chip-making facilities in upstate New York. The transfer was completed just last week, and Globalfoundries now owns the IBM chip-making plants in Poughkeepsie, N.Y., and Burlington, Vt., along with 16,000 patents, IBM’s former chip customers and a 10-year contract to supply Big Blue with chips.

ALSO READ: 3 Chip Stocks That Could Be the Next Sector Victims

For business and society to get the most out of tomorrow’s computers and devices, scaling to 7nm and beyond is essential. That’s why IBM has remained committed to an aggressive basic research agenda that continually pushes the limits of semiconductor technology. Working with our partners, this milestone builds on decades of research that has set the pace for the microelectronics industry, and positions us to advance our leadership for years to come.

Today’s smallest process technologies are 22nm and 14nm, so the 7nm technology announced Thursday also guarantees that Moore’s Law will continue to apply to the development of semiconductors. As described in 1965 by former Intel Corp. (NASDAQ: INTC) chairman Gordon Moore, the law is based on Moore’s observation that the number of transistors on a chip had doubled about every two years since the invention of the integrated circuit. Moore predicted that the trend would continue. And unlike so many other predictions, his has been accurate and verified for 50 years.

ALSO READ: How Analysts Rate AMD After Its Warning