After the release of the U.S. Air Force request for proposal (RFP) for a new training jet, the four competitors have all now either shown a modified version of a real plane or drawings of an all-new, clean-sheet design. Boeing Co. (NYSE: BA) on Tuesday launched a website offering a “sneak peek” at the design it has prepared with Saab for the so-called T-X training jet that will replace the venerable T-38.

Over the weekend, Northrop Grumman Corp. (NYSE: NOC) and its partners began runway testing of its clean-sheet design to replace the T-38. Boeing first teased its design at the Air Force Association conference in September of last year and is planning to reveal the new plane on September 13 at the company’s defense facilities in St. Louis, just a week before this year’s conference.

Boeing’s T-X spokeswoman, Rachelle Lockhart, said of the company’s decision to go with an all-new design:

We’re investing in the future of the Air Force, and we saw an opportunity to build something better from inception. We could give the Air Force exactly what it wanted while meeting its requirements and schedule.

Lockheed has teamed up with Korea Aerospace Industries (KAI) and plans to offer a modified KAI T-50. Raytheon is partnering with Italy’s Leonardo (formerly Alenia-Aermacchi) on a modified M-346 training jet built by the Italian firm and designated the T-100.

The Air Force released its final draft RFP last month and is expected to have the final document released late this year or early next. That will start the clock running on a one-year evaluation phase, according to Aviation Week. A milestone decision is expected early in fiscal year 2018 and entry into service is currently set for 2024.

The initial phase of the contract is worth about $8.4 billion, but the total could run much higher. The Air Force plans to buy 350 of the new planes. 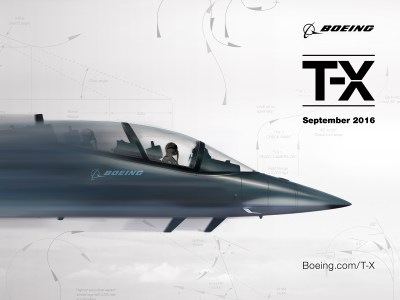