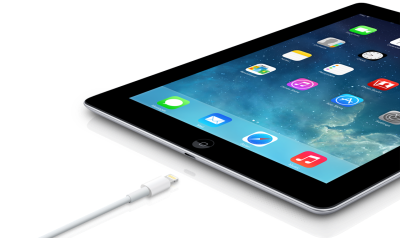 Everyone just remember that new Surfaces are coming shortly.

seriously tho, the retina iPad mini is the one i want

No major surprises from today's Apple event, but a real solid roll out of announcements. What did you think? http://t.co/TWHUF88mTB

The new iPad mini will be available late November.

The mini will get the retina display, apparently the most requested feature. Odd for something that can’t be detected by the human eye.

The mini will also get the new A7 chip, which the iPhone 5S runs on. It will be 4X faster than last year’s model.

It appears neither iPad will get new champagne color or fingerprint sensor, both big expectations. While it wasn’t really expected, there’s still no mention of iWatch. Stock is selling off.

It appears there will be no Touch ID for the iPad Air.

Nice, but not going to bring anyone to their knees.

Tim Cook is really, really excited about how truly amazing iPads are. They’ve sold a bunch, 170 million mark just reached, and they’re a heck of a lot more popular than “competing” tablets. iPad has sold more than four times all other tablet devices combined, says Cook.

There are now 475,000 apps just for the iPad. And apparently, according to the accompanying video Cook is playing, it can perform surgery and fly a plane.
October 22 | 1:55 – New Mac Pro Expensive, Looks Like Space Age Robot Brain

New Pro is built in the U.S.  The device, which is clearly for high end buyers — costs a whopping $3,000 — is built with performance in mind.

The Pro, which is a space age-looking aluminum cylinder looks beautiful, but also mildly threatening. If it wanted to take over the world, it could.

Both are available today with lots of fancy new specs.

Just in case people don't realize. Windows 8.1 was free, too, for Windows 8 users.

The new operating system can compress memory that isn’t being used, making the computer faster and more efficient.

Modest feature improvements: Apple maps and iBooks arrive on mac, notifications better, multiple display support improved, may have newer version of Pages that appears to be optimized for touch.

None of it revolutionary…

According to Cook, 20M devices were running iOS 5 days after launch. As of today, 64% of all compatible devices are running it.

Video down . . . apparently, Apple CEO Tim Cook has taken the stage. And he’s smiling!  According to folks at the event, he’s talking about how things have looked this year.

Apple sold 9 million iPhones, making it the biggest iPhone launch ever. Old news, but everyone seems to be very excited.

Apple Store was taken offline this morning in preparation for today’s announcement. While Apple may have a few surprises in store for the public, leaks and media speculation have identified a number of possible changes.

1. iPad getting smaller – According to multiple sources, the iPad is expected to shed a few pounds, likely getting 25% lighter and 15% thinner. Smaller bezels and rounded edges may help with the size. Adopting the iPad mini’s GF2 thin-film screen may help with the weight.

2. iPad mini gets bigger battery – While the iPad may be getting smaller and lighter, the iPad mini may be adding a few millimeters. A modest increase in size may be necessary to accommodate a bigger battery that will offer longer life.

3. Faster chips for iPad and iPad mini – The iPad will be updated with a faster A7X chip, a variation of the iPhone 5S A7 chip that was just released. iPad mini may get the same A7 chip as the iPhone. The 64-bit design will permit more RAM which would accommodate more memory-intensive applications. Think better video games.

5. Better camera for iPad and iPad mini – The iPhone 5S was recently equipped with a new camera chip that’s more sensitive and faster. It’s likely that the iPad and iPad mini 2 will get an upgrade to an 8MP front-facing camera with a faster shutter speed.

6. New Color Options – According to BGR, the full-size iPad will abandon the previous color scheme to match the iPhone 5’s — white and silver, or “space grey” and black. The Mini is also rumoured to be available in white and gold.

7. Fingerprint sensor – While there’s rumors going both ways on this one, a number of sources expect that the iPad and iPad mini will adopt the iPhone 5S Touch ID, the company’s fingerprint identity sensor that works on more than just fingers.

iPad, Apple, iOS7, mini, chargingApple (NASDAQ: AAPL) will release new versions of its iPad at 10:00 AM pacific time today, at an event in San Francisco. Sales of the current iPad have been slow, down 27% in its last fiscal quarter to $6.3 billion, compared with the same quarter a year ago. The new iPad has to be a rousing success.

The greatest barrier Apple faces to the success of these products is the army of tablets already in the market, particularly Samsung’s Galaxy Note. Recently, Microsoft (NASDAQ: MSFT) launched a new version of its embattled Surface, and the company Microsoft is about to buy — Nokia (NASDAQ: NOK) — launched its first tablet today.

Apple also faces the trend toward Google (NASDAQ: GOOG) Android powered machines which run 62%% of tablets in the market as of the second quarter, up from 38% in same quarter last year.  Meanwhile, Apple’s tablet market share fell by nearly half to 32% in the second quarter from 60% last year, according to IDC.

Wall Street expects that the iPad will do well, and that the launch will be well received. Shares of Apple traded flat for the last week, but spiked higher yesterday..$525. It traded as low as $496 five days ago. The announcement will rippled to the share values of other companies, particularly Microsoft and Nokia, which need strong sales of their new products to make inroads in a market where their share is negligible.