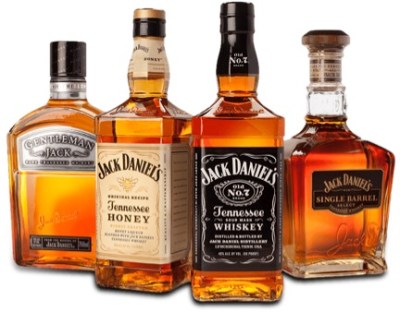 Source: Jack Daniel's
The performance of Jack Daniel’s whiskeys on Brown-Forman’s (NYSE: BF-B) fourth-quarter earnings is a sobering reminder of why Japan’s Suntory Holdings was drunk with lust for rival whiskey maker Beam last year — and was willing to pay $16 billion to drink it in. Premium whiskey continues to power growth, showing the spirit has far more staying power than other adult beverages, including tequila, vodka, and even wine.

The distiller reported fourth-quarter net income rose 17% year over year to $132 million, or $0.62 per share as the Jack Daniel’s family of brands grew underlying net sales 8%, driven largely by continued growth here at home where domestic markets account for 41% of net sales. While sales in the U.S. were up 4%, emerging markets continue to represent some of the best opportunities, even if they currently account for just a small portion of overall sales.

Turkey, for example, enjoyed the largest jump in sales, up 32% from the fourth quarter in 2012, though it’s just 1% of net sales, and Russia was up 23%, but it’s just 2% of sales. The other notable foreign market was France where underlying net sales increase 18% year over year. Of course, while China is essentially negligible to Brown-Forman at the moment, its sales were 35% higher.

Jack Daniel’s, though, remains the straw that stirs the drink. Tennessee Whiskey grew underlying net sales by 6%, with international markets experiencing a 9% jump in sales, and Tennessee Honey saw a still remarkable 36% global hike in sales despite having a tough comp to contend with from last year when sales doubled. Other whiskey brands, such as its premium and superpremium Woodford Reserve and Gentleman Jack, held their own as well, with a 19% jump in sales.

According to the Distilled Spirits Council of the U.S., whiskey’s popularity is growing with international sales topping $1 billion for the first time ever in 2013, up 5% from 2012 as Japan, Germany, and France started enjoying these distinctly American distilled beverages. Even so, it’s still U.S. drinkers who carried the “browns” category higher, leading sales 10% higher to $2.4 billion as volumes rose 7% to 18 million cases.

Although the TV show Mad Men may have given whiskey an extra push domestically, the reduction or elimination of trade tariffs are a large part of the drink’s international appeal. Brown-Forman, for instance, invested in a new distribution model in Turkey three years ago where it sells its products directly to either retail stores and wholesalers. While that’s currently paying dividends, both Turkey and Russia recently adopted bans on many forms of beverage alcohol advertising while increasing restrictions on sales.

Other spirits are not necessarily faring as well, at least not globally. Brown-Forman’s Casa Herradura tequila saw a 8% plunge in sales in the quarter in its home market of Mexico even as it was up 10% in the U.S. leading to a global decline of 1%. It remains a popular spirit, and DISCUS says since 2002 imports have grown 83%, with over 13 million 9-liter cases sold last year alone, but its rate of growth has generally slowed (even with last year’s bounce). 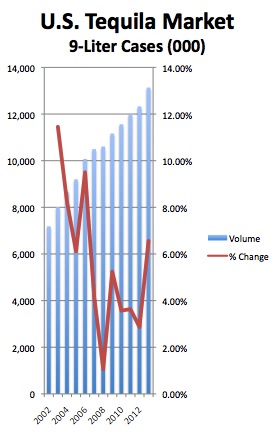 Diageo (NYSE: DEO) had a big hole to backfill in its portfolio after its distribution agreement with Casa Cuervo expired. While it was only a small portion of overall revenues, Diageo had been prepared to buy the brand from the family-owned business for as much as $3 billion. It’s since turned to superpremium tequilas like its partnership with Sean “P Diddy” Combs to fill the void.

Although the 6.6% increase in case volume tequila enjoyed last year outpaced the 6.2% expansion seen by whiskey as a whole, let alone all the other spirits, when compared to specific categories of whiskey, it actually lags behind most of them. Irish whisky, for example, jumped 17.5% while blended whiskies were up more than 14%. Bourbon and Tennessee whiskey exceeded tequila as well, rising 6.8% in 2013. 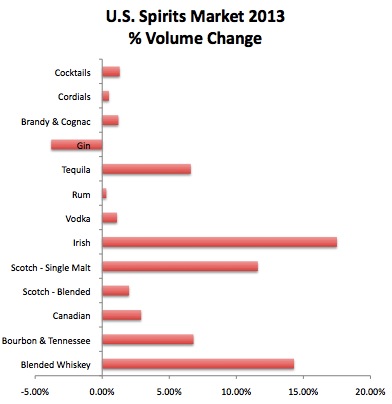 As the love affair with whiskey continues, both here at home and around the globe, expect Brown-Forman to continue imbibing the benefits of the world’s affinity for Jack Daniel’s.