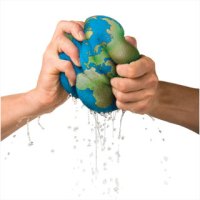 Some parts of the United States have begun to run low on water. That is probably not much of a surprise to people who live in the arid parts of America that have had water shortages for decades or even centuries. No one who has been to the Badlands in South Dakota would expect to be able to grow crops there.

The water problem is worse than most people realize, particularly in several large cities which are occasionally low on water now and almost certainly face  shortfalls  in a few years. This is particularly true if the change in global weather patterns substantially alters rainfall amounts in some areas of the US.

24/7 Wall St. looked at an October, 2010 report on water risk by environmental research and sustainability group, Ceres. We also considered a comprehensive July, 2010 report from the National Resources Defense Council which mapped areas at high risk of water shortage conflict. 24/7 Wall St also did its own analysis of water supply and consumption in America’s largest cities, and focused on the thirty largest metropolitan areas. One goal was to identify potential conflicts in  regions which might have disputed rights over large supplies of water and the battles that could arise from these disputes.  And, 24/7 Wall St. examined geographic areas which have already been plagued by drought and water shortages off and on.

The analysis allowed us to choose ten cities which are likely to face severe shortages in the relatively near-term future. Some of these are likely to be obvious to the reader. The area around Los Angeles was once too dry to sustain the population of a huge city. But, infrastructure was built that allowed water to be pumped in from east of the region. Las Vegas had similar problems. It was part of a great desert until Lake Meade was created by the Hoover dam built on the Colorado river.

Severe droughts that could affect large cities are first a human problem. The competition for water could make life in some of America’s largest cities nearly unbearable for residents. A number of industries rely on regular access to water. Some people would be out of work if these industries had poor prospects for continued operation. The other important trouble that very low water supplies creates is that cities have sold bonds based on their needs for infrastructure to move, clean, and supply water. Credit ratings agencies may not have taken drought issues into account at the level that they should. Extreme disruptions of the water supply of any city would have severe financial consequences.

The National Resources Defense Council (NRDC) report takes the following into account when assessing the likelihood of water shortages: “The risk to water sustainability is based on the following criteria:  (1) projected water demand as a share of available precipitation; (2) groundwater use as a share of projected available precipitation; (3) susceptibility to drought; (4) projected increase in freshwater withdrawals; and (5) projected increase in summer water deficit.”

The ten cities on this list are the ones with the most acute exposure to problems which could cause large imbalances of water supply and demand.  There are a number of metropolitan areas which could face similar problems but their risks are not quite as high. The water problem for US cities is, although it may not be evident, one of the largest issues that faces urban areas over the next ten years.

These are the ten largest cities by population that have the greatest chance of running out of water.