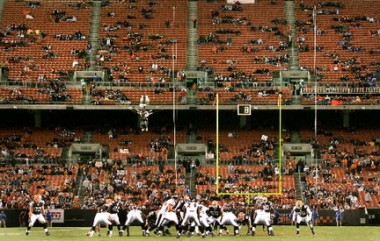 Sports teams often go through sharp swings in popularity. Attendance rises and falls. This frequently has to do with how well a team performs. When teams do well, people outside of their primary fan base become interested and start going to games. An example of this is the Florida Marlins, who won the world series in 2003 and saw attendance rise 60% in a single year. Alternatively, teams who do poorly also win new fans.

Read: The 12 Major League Sports Teams Running Out of Fans

Despite the relatively anemic growth overall, some teams have done extraordinarily well drawing fans. MLB teams such as Los Angeles and Minnesota saw crowds increase more than 50%, while Philadelphia’s attendance doubled. NFL teams such as Arizona, Atlanta, and Dallas jumped more than 25%.

Using records provided by ESPN, 24/7 Wall St. examined changes in attendance for the four major league sports from 2001 to 2010 to identify the twelve teams that decreased more than 20%. The majority of these teams have performed poorly in recent years, causing fans to lose interest. The win-lose record and number of championships is included to reflect the former and current state of each team.

These are the 12 sports franchises losing the most fans.