10 Companies to Own for the Next Decade

GE has recovered handily from the recession. While we chose General Electric Co. (NYSE: GE) as the top conglomerate pick in 2010 based in part on it having the highest snapback potential after the financial meltdown, the reality is that GE is still moving toward a post-financial conglomerate model. Its latest financial asset sale and the coming spin-off of the rest of Synchrony Financial will allow for massive share buybacks and an expected return to dividend growth in 2016.

Still, GE outyields its rival conglomerates handily with a 3.4% dividend yield. What has taken place since 2010 is that GE is becoming more focused on being an industrial conglomerate with less financial asset exposure. It has exited NBC Universal entirely, it has moved beyond appliances, it moved toward more energy operations and its acquisition ambitions now appear to be focused on opportunistic bolt-on and tuck-in companies. As noted in 2010: Its positions in health care, energy, water filtration, jet engines and rail engines will assure GE’s future growth.

Alternative Conglomerate Pick: 3M Co. (NYSE: MMM) has been stellar, but high valuations make it desirable if the stock goes on sale. 3M is up 110% or so since 2010, it trades at about 19 times the blended 2015/2016 earnings estimate and it has picked up its dividend game to a 2.6% yield, with roughly half of its normalized income going into dividend payouts.

Republic Services Inc. (NYSE: RSG) remains in what is close to a duopoly when it comes to large public garbage collectors, although they prefer to be called waste management service providers. Being in the waste management business is very profitable, but it comes with many pitfalls. Recycling efforts can harm these companies, but low commodity prices and resell prices have made recycling less economic, a potential boom for landfill owners, if they can work better deals on mandatory recycling efforts with cities and counties.

The companies dominating this industry have long-term contracts, and there are a high cost barrier and a regulatory barrier to entry. Still, environmental remediation costs remain a risk and can date back many years. Republic was worth closer to $11 billion in 2010, and its market cap in mid-2015 is about $14.5 billion. One consideration here is that Bill Gates’ Cascade Investment arm owns just over 30% of Republic, with Gates eyeing this as a futurist with a protected market. Republic was recently valued at about 19 times a blended 2015/2016 earnings estimate, and its dividend yield is still roughly the same as it was in 2010 at about 2.8%.

Alternative Garbage Pick: Waste Management Inc. (NYSE: WM), at 19 times a blended 2015/2015 earnings valuation and with a 3.1% yield. It may even look slightly more attractive than Republic today. Republic is up close to 60% and Waste Management is up about 68% since 2010.

This was our top defensive health care stock pick in 2010 due to its mix of branded drugs and leadership position in generic drugs. It turned out, as of mid-2015, that Teva Pharmaceutical Industries Ltd. (NASDAQ: TEVA) was among the dullest and most challenging of the stocks to own for a decade — almost to the point of regret. Biotech’s growth blew this out, and even Big Pharma giants have overcome the patent cliffs. Also, Teva has developed ambitions of large acquisitions again. Back in 2010 Teva gave 2015 targets of $31 billion in revenues and earnings of close to $6.8 billion, but that looks more like $20 billion and $4 billion in a more realistic scenario in 2015.

The view of 24/7 Wall St. is that the patent cliffs make for a huge generic opportunity and focus in the years ahead as governments want cheaper drugs, yet the cost of generics has been rising. Biosimilars are still at their infancy as of mid-2015 and could be a next wave of growth. Teva’s growth simply stalled, and it has had management changes, and that leaves many other potential decade-long holdings that can be found as well in 2015 (see below). Teva’s dividend has almost doubled since 2010 and yields about 2.2% in mid-2015, with only about a 30% payout ratio, and Teva is valued at a mere 12 times expected 2015/2016 blended earnings expectations.

Alternative Health Care Picks: Mylan N.V. (NASDAQ: MYL) in generics (with no dividend yet), or in broader health care there is United Health Group Inc. (NYSE: UNH), which is now a DJIA stock as the leader in health insurance. Johnson & Johnson (NYSE: JNJ) keeps growing earnings and keeps growing its dividend as well. Even Gilead Sciences Inc. (NASDAQ: GILD) has taken over biotech with better than a $150 billion market cap, and with a dividend recently introduced above a 1% yield. Health care valuations and ongoing share performance in subsectors make broader health care investing a very broad topic that is hard to make just one pick. Either way, alternative picks outside of Teva seem to be warranted, given the current layout and expectations.

Walt Disney Co. (NYSE: DIS) has been as big of a winner, as expected in 2010, but then with about another 100% added on to it. The media and entertainment giant was picked for its extensive movie library, movie studios, merchandising, theme parks, vacation destinations, cruises, ESPN, Marvel, Pixar and ABC. In 2010, Star Wars was not even on the books nor was it even a known target with six planned films already, and Frozen was not even a known movie franchise at the time. These have been and will be game-changing winners for Bob Iger and his endless successes. Disney owns a piece of Hulu as well.

Back in 2010, Disney had not even gone above its highs from the late 1990s. We had suggested in 2010 that Disney needed to improve on its low dividend yield of 0.9%, and while it has almost tripled the payout, the massive share gain has kept the yield low at about 1.1%. Disney has quite simply surpassed all expectations and it had model earnings, but new investors have to pay 20 times the blended 2015/2016 earnings to buy Disney now.

Alternative Media Pick: Disney simply has the best-in-class position. In cable and media, Comcast Corp. (NASDAQ: CMCSA) has been building on content to maintain its relevance and lock in subscribers against the cord-cutters, and its NBC Universal owns a piece of Hulu. The rest of Disney’s operations are broad enough that Disney remains its own best replacement, particularly if its stock gets smacked down in the year or years ahead for some reason. 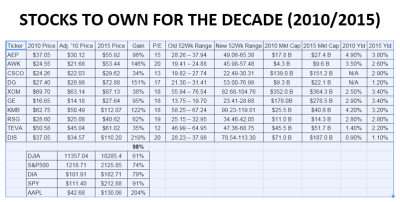