Why Icahn May Be Too Ambitious in His Apple $240 Target

Source: Thinkstock
Carl Icahn is back at it again. The 79-year old activist investor has issued an open letter to Apple Inc. (NASDAQ: AAPL) CEO Tim Cook, with a valuation path — driven largely by buybacks — that would theoretically make Apple worth a whopping $240 per share. The plan sounds optimistic, but honestly it sounds too optimistic.

In February Icahn originally issued an open letter to Cook and Apple investors regarding the direction and valuation that he thinks Apple should have. At that time he called for the share price to rise to $216, considering Apple implement an increased share buyback plan.

Apple reported its earnings in April and did in fact increase its share repurchase plan. The tech giant announced that its board of directors has authorized an increase of over 50% to the company’s program to return capital to shareholders. Under the expanded program, Apple plans to utilize a cumulative total of $200 billion of cash by the end of March 2017.

However, this was just not enough for Icahn. He still believes that, given Apple’s cash and investments and positive cash flow, the company could do more, but there are no signs Apple plans to do so.

Despite Apple not necessarily moving in line with Icahn’s plan, he revised his price target to a whopping $240. Icahn explained his valuation of Apple shares in his most recent open letter to Cook and Apple sent out on May 18:

To arrive at the value of $240 per share, we forecast FY2016 EPS of $12.00 (excluding net interest income), apply a P/E multiple of 18x, and then add $24.44 of net cash per share. Considering our forecast for 30% EPS growth in FY 2017 and our belief Apple will soon enter two new markets (Television and the Automobile) with a combined addressable market size of $2.2 trillion, we think a multiple of 18x is a very conservative premium to that of the overall market. Considering the massive scope of its growth opportunities and track record of dominating new categories, we actually think 18x will ultimately prove to be too conservative, especially since we view the market in general as having much lower growth prospects.

What you are hearing from Icahn is really nothing new. He keeps coming up with massively higher valuations that are based on many “if-then” scenarios. The one if-then that Icahn is not considering is that this may gut Apple’s cash balance, and at a time that growing the core business for what is already the largest company in the world may be difficult in the years ahead.

As a reminder, it is not uncommon for investors, much less activist investors, to talk up their book.

It is worth mentioning that a guy like Carl Icahn might not have to care if he leaves a company like Apple leveraged up. What if Apple runs into a period when it becomes harder and harder to add endless growth? Considering that the ramifications could be years in the future, men in their late seventies and eighties might not think they need to care about long-term ramifications and the fallout seen thereafter. 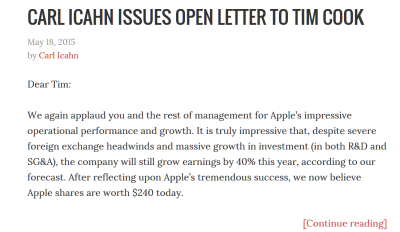