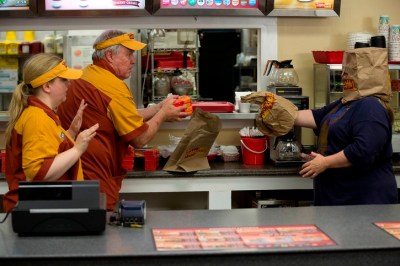 Source: Warner Bros./Time Warner Inc.
Heavily anticipated movies are not on tap for the coming, long Fourth of July holiday weekend. Moviegoers are presumably busy barbecuing and shooting off fireworks on Friday, and after last weekend, it is possible that audiences need a break.

The fourth Transformers movie, “Transformers: Age of Extinction,” opened last week on 4,233 screens and pulled in $100 million in the United States and another $101.3 million internationally. There will be no follow-up that even comes close this weekend.

Three films opened on more than 3,000 screens on Wednesday: the horror film “Deliver Us From Evil,” an adventure film titled “Earth to Echo” and a road film featuring comedian Melissa McCarthy titled “Tammy.” None of the three has managed to nab must-see reviews, which will hold the weekend take down even more.

Of the three, “Tammy” from Time Warner Inc. (NYSE: TWX) opened on the most screens, 3,400, and for the five days through Sunday the film is projected to earn about $29 million. For the three-day weekend, “Tammy” is expected to bring in just $19 million. According to Box Office Mojo, the R-rated film earned $1.3 million in Tuesday night previews after receiving uniformly negative reviews.

Sony Corp. (NYSE: SNE) released “Deliver Us From Evil” on 3,045 screens, and the R-rated horror film is expected to post sales of $18 million over the five days and $13 million over the three-day weekend.

Live-action adventure film “Earth to Echo” hit 3,229 screens on Wednesday. The PG-rated movie got mixed reviews and is expected to post box-office receipts of $17 million for the five-day period and $12 million for the three-day weekend.

The big winner for the holiday weekend is expected to be “Transformers: Age of Extinction” again, even though the box-office take figures to fall 60% to around $40 million.

Comcast Corp.’s (NASDAQ: CMCSA) Universal Studios hammered competitors at last year’s Independence Day weekend with “Despicable Me 2,” which grossed $83.5 million for the weekend and $143.1 million from the five-day mid-week opening.