Despite its relatively high state debt of $4,133 per person, Maryland has a credit rating of AAA, the highest available. The state also has a particularly low poverty rate. Only 9.1% of people are living below the poverty line — the third lowest in the country. These impressive figures may be the result of state lawmakers’ efforts, according to Al Passarella, research and policy associate at Advocates for Children and Youth, as reported in The Washington Times. However, the number of Maryland residents in poverty increased by nearly 80,000 from 2009 to 2010, the paper notes.

Hawaii dropped two slots (from 10th to 12th) on our list because of the decline in median household income and an unchanged unemployment rate — many states have improved in the past year. However, the state’s overall picture is a positive one. Just 7.9% of state residents are without health insurance, the second-lowest rate in the country. Hawaii also ranks in the highest 10 for median household income, and among the lowest 10 in poverty and unemployment.

Also Read: Ten Brands That Will Disappear In 2012

New Hampshire has a poverty rate of only 8.1% — the lowest in the country and down from 8.5% last year. The state also has the third lowest rate of violent crime and the fourth lowest unemployment rate. The state’s finances are not perfect, however. It has the seventh highest debt per capita and a credit rating of AA, which is two grades below the best. The state government is trying to address this problem. On March 30, 2011, the New Hampshire House approved a bill that would make deep cuts to social and health programs and limit collective bargaining rights — aimed at restricting how unions impact these programs.

Maine has moved up three spots from last year’s ranking, partially because of improvements in health insurance coverage and unemployment. For the second year in a row, Maine sports the lowest violent crime rate in the country, at 122 incidents per 100,000 people. Fiscally, the state is not as sound as others. The state only has an AA credit rating. In the fiscal year 2009, the state had a debt of $4,092 per person, the 15th highest in the country.

Only 10.2% of Pennsylvania residents go without health insurance. This includes residents covered under adultBasic, a state-funded health plan for low-income adults. This program was canceled early this year due to financial restrictions. In 2009, the state collected revenues of just over $3,000 per person. At the same time, it spent over $6,100 per person.

Wisconsin would perform much better on our list if it were not for its fiscal scores. The state only has a AA credit rating, and its $3,707 of state debt per capita is the 19th worst in the country. However, the state performs better than average in median household income, poverty rate and unemployment. Also, just 9.4% of the state’s population is without health insurance, a better rate than all but six states.

Washington state has moved down one slot from last year’s rank, partially due to an increase in unemployment and an increase in poverty rate. On the whole, the state performs better than average in most categories, including household income, violent crime rate and high school graduation. And while the state does not make it to the top 10 in any single category, it also avoids the bottom 10 in each. 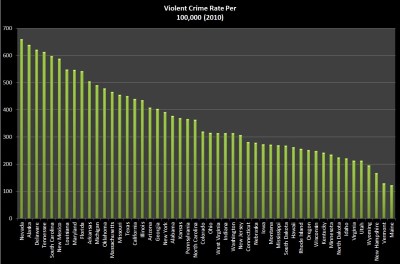 North Carolina has jumped five spots compared to last year’s ranking, largely because of the substantial reduction in violent crime over the past year. The rate dropped from 467 violent crimes for every 100,000 residents in 2009, to 363 per 100,000 people in 2010. Despite a healthy budget, including a AAA credit rating and low debt per capita, North Carolina still performs worse than average in a number of categories, including high school graduation rate, unemployment, health insurance coverage and poverty.

Missouri has moved up five spots from last year’s rank of 24 partly because its unemployment rate has decreased from 9.3% to 8.7%. The state also boasts a AAA credit rating from S&P thanks to state efforts to fund its debts.