States Profiting the Most from Sin 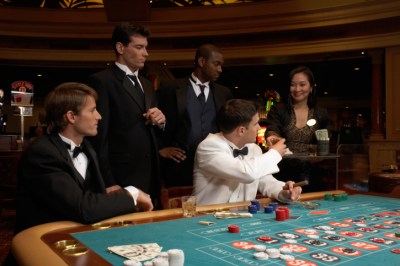 Source: Thinkstock
In 2011, state governments collected more than $50 billion in taxes and proceeds from vice: gambling, smoking and alcohol consumption.

Some argue that state governments should not profit from residents’ vices. However, some states rely on these activities for a substantial proportion of their budget. In Nevada, “sin taxes” accounted for nearly 6% of the state’s revenue. Based on data from the Census Bureau and the American Gaming Association, 24/7 Wall St. identified the states where the largest percentage of revenue came in the form of proceeds from alcohol, tobacco and casino taxes, as well as the lottery and state-regulated liquor stores. These are the states profiting most from sin.

Excise taxes on tobacco are among the most politically charged and varied in the country. While Rhode Island charges $3.50 in taxes per pack of cigarettes, states like Virginia and Missouri charge less than $0.50.

Frequently, consumption is higher in the states making the most from sin taxes. For example, many of the states that profit the most from sin rely heavily on tobacco revenue. While tobacco tax rates are relatively low in some of these states, sales are higher than the national average. In fact, the states with the highest taxes for alcohol and tobacco do not necessarily bring in the most money.

Relative to some of the other sin-related sources of income, taxes on alcohol are not a big source of revenue. However, some state governments opt to control liquor sales, which can involve regulating stores and collecting commissions. In others, it can even mean warehousing and selling the liquor directly to consumers. In New Hampshire, state-controlled liquor sales accounted for 1% of the state’s income.

While alcohol and tobacco are factors in some of the states that profit most from sin, gambling is almost always a much more significant source of income. In five states, casino tax revenue accounted for more than 2% of state revenue.

In Nevada, not surprisingly, it was nearly 5% of revenue. Lotteries were also a major source of income. The Rhode Island, Delaware and West Virginia Lotteries all brought in well over 3% of state income. The reason for this, according to the American Gaming Association, is that these states operate and own all commercial casinos in the state not run by Native Americans.

The moral question of whether states should be profiting from its residents’ bad habits is a difficult one. Some argue that states are attempting to encourage better life choices. The case might be made most strongly for cigarette taxes. In states like New York, which has a $4.35 cigarette tax, there are signs that residents are quitting smoking because it is becoming too expensive.

Others, like the Tax Foundation’s Scott Drenkard, argue that some states are motivated by profit. Specifically, increasing state revenues through higher taxes. This is clear in the case of state casinos, which are being added quickly all over the country. Drenkard Added “A better discussion is ‘is this worthwhile for these communities’ rather than ‘is this the sort of thing we can squeeze money out of?”

In order to identify the states that profit most from sin, 24/7 Wall St. reviewed state tobacco taxes, alcohol taxes, casino taxes, as well as proceeds from state-controlled liquor stores and state lotteries. These sources of income represented the largest proportion of total state income in these states. Tobacco, alcohol, liquor store and lottery income came from the Census Bureau’s State Government Finances report. Casino taxes came from the American Gaming Association’s “State of the States” report. All figures are for fiscal year 2011, the most recent year for which there is consistent data available for all income. 24/7 Wall St. also reviewed excise tax rates from the Tax Foundation, as well as alcohol consumption data from the Center for Disease Control.

These are the states profiting most from sin.