The States With the Most McDonald's 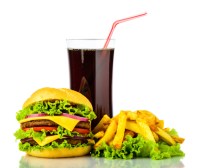 McDonald’s (NYSE: MCD), with almost 16,000 outlets, is the largest fast-food hamburger chain in the United States. Many of the states where McDonald’s iconic Golden Arches dominate the landscape are also, coincidentally, states with the highest rates of obesity and deaths due to heart disease.

The circumstantial evidence may be there, but no studies demonstrate a direct link between McDonald’s specifically and adverse health outcomes. Academic research does, however, show high concentrations of obesity and other negative health outcomes where there are clusters of fast food restaurants of any type.

While there are of course other fast food chains in the country, the association between McDonald’s and many negative health outcomes is often stronger than it is with other chains. Of the 10 states with the greatest concentration of major fast food restaurants, excluding McDonald’s, three have among the lowest obesity rates in the country and none are among the 10 highest.

Click here to see the states with the highest concentrations of McDonald’s restaurants.

Fast food consumption may lead to negative health outcomes. However, the concentration of fast food stores does not account for consumption levels. There are also many other factors, such as low income, high poverty rates, and distance from sources of fresh fruits and vegetables, which contribute to negative health outcomes. The states with the highest obesity rates share a number of these factors. They have some of the lowest household incomes in the country and, correspondingly, some of the highest poverty rates.

Academics who have authored separate studies on fast food restaurants and negative health outcomes differ in their conclusions.

Dr. Lewis Morgenstern, a professor of neurology and director of the stroke program at the University of Michigan Hospital, led a study into the relationship between the concentration of fast food restaurants in a neighborhood and strokes in that neighborhood.

The author of a separate study had a somewhat alternative view. “Fast food seems to be something that is an indulgence for us,” said Daniel Kruger, professor of health education and health behavior at the University of Michigan School of Public Health. Consuming fast food may be ok in moderation, but eating too much of it can result in a range of adverse health outcomes.

Kruger’s study found a high local concentration of fast food outlets is itself a risk factor. “The main point of our study was that people have a lot more of these fast food restaurants around them, and they’re going to have higher obesity,” he said. Kruger explained how the high frequency of fast food restaurants like McDonald’s is often representative of a poor landscape, in which multiple factors can lead to poor health.

While Kruger cited a study that suggested some fast food outlets serve less nutritious food than others, like Morgenstern, he would not single out McDonald’s or any other chain.

“I don’t think that we can blame the company at this point,” Morgenstern said. “It would be nice if they helped in the research to try to figure out whether the products that they sell are related to negative health, but I don’t think we know that at this point. We need more research.”

To identify the states with the greatest concentration of McDonald’s restaurants, 24/7 Wall St. reviewed location data for McDonald’s, Burger King, Wendy’s (NASDAQ: WEN), Taco Bell, KFC which is a division of Yum! Brands (NYSE: YUM), Subway, Starbucks (NASDAQ: SBUX), Pizza Hut, Dunkin’ Donuts (NYSE: DNKN), and Chick-fil-A from Menuism. Population data, income, and poverty statistics are from the U.S. Census Bureau’s 2013 American Community Survey (ACS). Also from the ACS, we included educational attainment rates, self-reported obesity rates, and the percentage of the population without health insurance. We also considered the percentage of the population with low access to major food stores from the USDA’s Food Atlas.

These are the states with the most McDonald’s outlets per 100,000 residents.