The Most Democratic County in Each State 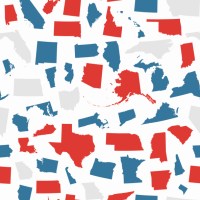 With the 2016 presidential primaries less than 12 months away, campaign season is well under way for candidates of both parties. In the last election, President Barack Obama won with about 51% of the popular vote, winning 26 states and the District of Columbia to capture 332 of 538 electoral votes. Despite the Democratic victory, an analysis of the reddest and bluest counties in each state shows stark differences between them.

Based on voting data compiled by political news organization Politico and a review of current and historical representation in the U.S. Congress, 24/7 Wall St. created an index to measure the political leanings of county residents. Shannon County is not just the bluest county in South Dakota, but also the most Democratic county in the nation. Madison County, Idaho, on the other hand, is the reddest county in the state and the country. These are the most Republican-leaning and most Democratic-leaning counties in each state.

Click here to see the most Democratic county in each state.

Click here to see the most Republican county in each state.

The racial composition of counties was also significant. While 74% of Americans identify as white, a lower proportion of the population in 33 of the bluest counties identified as white.On the other hand, the vast majority of residents in most of the reddest counties identified as white. The share of the white population was lower than the 74% of Americans who identify as white in only two of the reddest counties.

While several measures contributed to a county’s leaning, including senate and house votes, the bluest counties almost always had the highest share of votes for the Democratic presidential candidate compared to other counties in the state, and those shares were almost always a majority. However, in four of the bluest counties — Maricopa County, Arizona, Oklahoma County, Oklahoma, Summit County, Utah, and Jefferson County, West Virginia — a majority of adults voted for Republican candidate Mitt Romney. Obama still captured the largest shares of votes in these counties compared to other counties in the state.

However, some of the bluest counties are not as blue as those in other states. Macon County, Alabama, for example, has sent Republican Rep. Mike Rogers to Congress each election cycle since 2002, yet in 2012 gave 87.1% of its vote to Obama. And Republican Rep. Mike Simpson was first elected to Congress from Blaine County, Idaho in 1999 and re-elected every two years since, but that county gave 58.8% of its presidential vote to Obama.

To identify the most Democratic county in each state, 24/7 Wall St. reviewed the percentage of eligible counties casting votes for Barack Obama in 2012 from Politico, a political news organization. Eligible counties were those that cast more than 2,000 total votes. Additionally, we created an index of each county’s Congressional representation in both the House of Representatives and the Senate since 2007. The highest values of our index were given to counties where Congressional representation was dominated by Democrats. The “bluest” county in each state is the product of our Congressional index and the share of a county’s votes cast for Barack Obama. The percentage of county residents who had attained at least a bachelor’s degree, median household incomes, and the share of residents identifying as white come from the U.S. Census Bureau’s 2013 American Community Survey five-year estimates.

These are the most Democratic counties in each state.