Roughly 765,000 Kansas City residents — or 37.8% of the city’s population — live in a homogeneous zip code, or where at least 80% of residents share the same skin color or ethnicity, the ninth 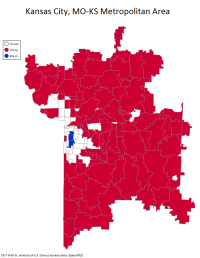 highest proportion in the country. Out of the 166 zip codes that make up the Kansas City metro area, 123 are home to predominantly white residents.White city residents have very little interaction with the city’s black residents. Of all the people a white person comes into contact with in the area, only 5.5% are black, significantly less frequent than the similar figure of 12.8% of contacts across the 50 largest metro areas.

Segregation like this can have very discernible consequences. White households earn nearly twice the median income of black households. Three of the area’s zip codes are home to 15.9% of the metro’s black population, and the median household income in each is less than $30,000 annually. More than 26% of the metro area’s black population lives in poverty, slightly less than the national poverty rate among black Americans but more than three times as high as the poverty rate among the city’s white residents of 8.3%. School systems are also affected by segregation. While one-third of all metro area residents have at least a bachelor’s degree, in zip codes that are home to predominantly black residents, less than 12% of adults have a college degree.

Birmingham was perhaps the most extreme example of segregation in the 1960s, but it has come a long way from its days of racially segregated restrooms and lunch counters. Nevertheless, the 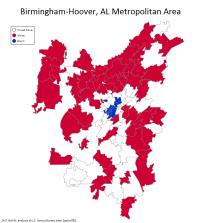 metro area is still among the most segregated areas in the country, with roughly 40% of its population living in areas with nearly uniform racial composition. While more than half of the zip codes in Birmingham are all but racially homogeneous, black and white area residents may be even more segregated within these neighborhoods. On average, 70% of people a white person interacts with are also white, while 60% of people a black person comes in contact with are also black.

Nationally, more than 13% of black Americans are unemployed, but in Birmingham 8.3% are. While this is one of the lowest jobless rates among black workers in the country, it is still higher than the unemployment rate of 5.7% among white residents. Despite the strong labor market, there is still a wide disparity in income. Black households had a median income of $33,203, while median income for white households was more than $56,000.

Racial and socioeconomic segregation are often one and the same. As is the case across the nation, black and Hispanic families in the Boston area tend to live in higher poverty neighborhoods and 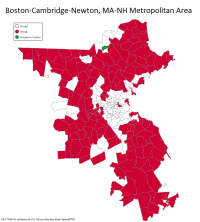 earn lower incomes than their white peers. The median household incomes in all but one of the 145 predominantly white zip codes in the Boston area exceed the national median household income of $53,046. White households earn $79,730 annually, while a typical Hispanic household earns less than half that income, at $39,810 annually — the largest gap between whites and Hispanics among metros reviewed.

The two non-white zip codes — both located in the Lawrence area — are home to less than 1% of area residents, but nearly 10% of all Hispanics and Latinos living in the area. A typical household living in each of these zip codes earns $18,261 and $31,214, respectively. Similarly, while 6.8% of white metro area residents live in poverty, 26.1% of Hispanic residents do. A growing body of research suggests that residential racial segregation promotes poverty, which in turn results in worse educational outcomes. These two zip codes also have far lower educational attainment rates than national rates, an even bigger disparity compared to white residents’ education levels.