The line between free speech and misinformation brightened again this past weekend. A dating app for people who have not been vaccinated against COVID-19 has run afoul of app store rules at both Apple Inc. (NASDAQ: AAPL) and Alphabet. Unjected, the app in question, promoted itself as a community for “like-minded people that support medical autonomy and free speech,” according to a report from Bloomberg.

The app introduced a social feed feature in mid-July that led to a review by Google Play that picked out posts claiming vaccines were “experimental mRNA gene modifiers, … bioweapons, … and nanotechnology microchips” that could allow users to be linked to the 5G network. Google Play gave the app’s developers two weeks to remove the social feed, a demand the developers met.

However, Unjected co-founder Shelby Thomson told Bloomberg that the social feed will be restored along with the offending posts. Her plan is to remain under Google’s radar.

On Saturday, Bloomberg News contacted Apple, which removed the app from the App Store shortly thereafter. Apple’s email to Unjected said the app “inappropriately refers to the Covid-19 pandemic in its concept or theme.”

Unjected’s app has been downloaded more than 18,000 times, according to Bloomberg and its Instagram account has almost 25,000 followers.

The Australian government has rolled out a digital certificate that people can download to the Apple Wallet or Google Pay and use to verify that they have received their vaccination against COVID-19. The certificate verifies that a person has received two doses of either the AstraZeneca or Pfizer vaccine. 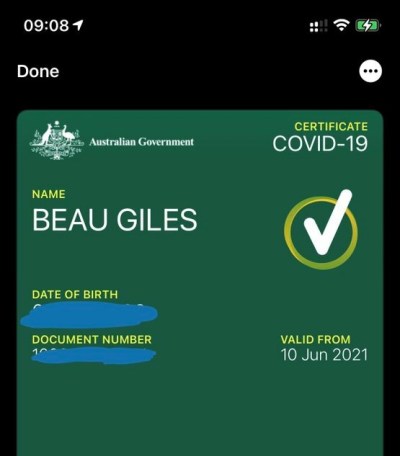 Source: Tap Down Under

While Australia does not yet require official certificates of vaccination, Tap Down Under comments that proof of vaccination “will undoubtedly become required sometime in the future.”

In other news, worldwide shipments of tablets, including the iPad, rose by 4.2% year over year in the second quarter, according to the latest data from research and analysis firm IDC. Some 40.5 million units were shipped during the quarter, more than three times the 12.3 million Chromebooks shipped in the quarter. Chromebook shipments increased by 68% year over year.

The iPad accounted for almost 32% of tablet shipments last quarter, shipping 12.9 million units, a year-over-year increase of 3.5%. Samsung shipped 8.0 million units, accounting for about 20% of worldwide shipments. Lenovo shipped 4.7 million units to claim an 11.6% share, and Amazon shipped 4.3 million units (10.7% share). Double-digit market share gains at Samsung, Lenovo and Amazon came at the expense of Huawei, which saw its share decline by 53.7% year over year.

HP shipped 4.3 million Chromebooks in the quarter, garnering 35% of the global market. Lenovo shipped 2.6 million for a 21% share, and Acer’s total shipments reached 1.9 million units for a 15.3% share.

The following chart from IDC shows that while tablet and Chromebook shipments remain high, they have slipped from their peaks in the third and fourth quarters of 2020. 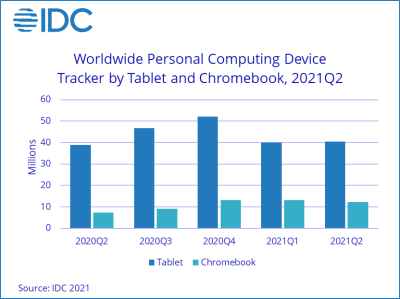