In Defense Of Steve Ballmer 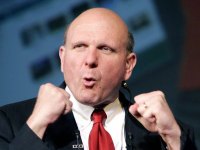 In defense of Steve Ballmer, Microsoft (NASDAQ: MSFT) may not be a company that can be greatly improved, no matter who runs it. Hedge fund chief David Einhorn of Greenlight Capital called for Ballmer to resign after 10 years on the job. Einhorn’s argument is compelled by the drop in the value of the stock over the time Ballmer has been in charge of the world’s largest software company.

Big companies often run out of growth opportunities, unless those opportunities come from M&A or restructurings. Some Wall St. analysts believe that tech giant Cisco (NASDAQ: CSCO) has become too large and unwieldy to run. CEO John Chambers may have expanded too far, too fast. In another sector, GE (NYSE: GE) may be too large to operate efficiently. Diversity, which was supposed to be a strength, has merely made GE’s performance ordinary because it is so closely tied to the overall economy.

The size and growth problems extends to some newer companies like Google (NASDAQ: GOOG). Its growth rate has slowed considerably and it is still in only one business that brings in money. Its diversification efforts have rarely shown success.

Ballmer has not done much to change the three large divisions of the company which are still ridiculously profitable–Windows, Servers and Tools, and Business.  Many critics argue he has not aggressively moved these businesses  to the cloud.  However, cloud computing has gotten a bad name recently because of service problems at cloud champion Amazon.com (NASDAQ: AMZN) and security troubles at Sony. It will be several more years to see whether Microsoft moved too slowly.

The two main criticisms of Ballmer stem from his poor diversification strategies. He has pushed into video game consoles with the Xbox line–which now makes money. He has also pressed Microsoft to be a leader in search engine software and internet content. The Xbox is the backbone of a global network that allows the distribution of premium content and data. It is not what most analysts would call a cloud, but it operates much like one. As for search, Ballmer may have been a fool to think it is important to his company. That decision may dog him permanently.

The M&A problem Ballmer has not tackled is primarily because he has not broken Microsoft into pieces. Cisco has begun to do that as a way to separate its enterprise businesses from consumer operations. Wall St. calls on GE to sell off many of its units every time the conglomerate issues mediocre earnings. Microsoft could certainly spin off its game and search operations, and its board may be foolish for not doing so.

The last reason why Einhorn and those who think like him want to remove Ballmer is due to his decision to buy Skype, the 650 million customer strong, voice-over-IP company. Ballmer may see this as a way to make up for Microsoft’s failure to gain a foothold in the wireless industry. Its Windows mobile products have been failures. Microsoft hopes to change that with a joint venture with Nokia (NYSE: NOK), the largest handset manufacturer in the world. But, Nokia is crippled by itself. It was late into the rapidly expanding smartphone business.

Perhaps Ballmer thinks that Skype and Nokia will be the catalysts for a wireless success. The odds are long because large telecom companies and firms like Apple stand in Microsoft’s way. The Skype deal may be Ballmer’s last major decision if it flops.

Ballmer’s decisions have not been entirely his own. He has his board and Bill Gates to look over his shoulder. They have to take as much responsibility as Ballmer does for Microsoft’s problems. Ballmer, Gates, and the rest have made at least one brilliant decision. They have mostly left the highly profitable Windows operations alone except for occasional tuning to keep them updated.

If Ballmer is to be judged, it cannot be on Windows, which has had mixed reviews, but steady earnings. Ballmer has tried to diversify his way out of the long term decline of Windows. So far, Wall St. believes he has been ham handed. Maybe that is true. But, maybe Gates should have pushed the matter, if he became worried about the company he started.

Ballmer is in many ways like Jeff Immelt, the head of GE. He was left with an empire built by a brilliant predecessor. That empire may have worked when that predecessor was in charge and he operated in an environment which is now decades old. But, GE and Microsoft were not built with the longer term in mind. Their current performances are some sign of that.

Ballmer has acknowledge his company’s problems too late. He must know that now. Skype may work and it may transform Microsoft’s mobile fortunes quickly. Memories on Wall St. are short. This year’s goat could be next year’s hero.