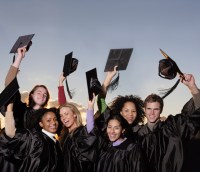 The job market has remained relatively stagnant since 2009. To make matters worse, the educational requirements of the average U.S. employer have increased consistently from 2005 to 2009, recently outpacing the growth of educated labor, a new report shows. This means that the average job now requires a higher level of education than the average worker possesses — a bad sign for much of America’s labor force.

However, there are a number of metropolitan areas in the country that have exceptionally small education gaps, or “shortages of educated workers relative to employer demand,” according to the report “Education, Demand, and Unemployment in Metropolitan America” by the Brookings Institution. These areas tend to have a large number of highly educated workers available to meet rising demand.

As a result, these cities often have lower unemployment rates than the national average, which was 9.1% as of July 2011. “Highly educated metropolitan areas like Salt Lake City, Raleigh, Indianapolis, and Knoxville have avoided very high unemployment rates despite having high concentrations of jobs in industries that were hit hard during the recession,” Jonathan Rothwell, one of the report’s authors, told 24/7 Wall St. “The reason, in large part, is that the average worker in those areas has enough education to meet the needs of the average job.” In cities such as Boston and Madison, which are major educational hubs, a cycle is formed. They produce lots of educated people and provide lots of jobs for educated people.

There are still some cities with small education gaps that do not have exceptionally low unemployment rates. This is the result of unavoidable economic forces. San Francisco, for instance, was badly damaged when the housing bubble burst — the same crash that has hurt so much of California. San Jose’s unemployment rate remains high because its manufacturing base was hit especially hard during the recession.

24/7 Wall St. has analyzed the ten metropolitan areas in the Brookings report with the smallest education gaps. We looked at what causes these areas to have highly educated residents and how their education levels are affecting the areas’ unemployment rates. We then looked at numbers for median household income from the Census Bureau, all of which were higher than the national average of $51,425.

These are the cities where people are most qualified to work.