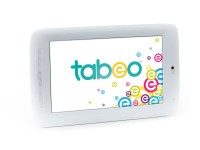 Privately held toy retailer Toys “R” Us announced today that it will offer a proprietary tablet device for kids called “tabeo” only at its own stores beginning October 21st. The new device may be ordered at the company’s web site beginning today. The retail price is $149.99.

This is a risky move for the retailer. New tablets from Amazon.com Inc. (NASDAQ: AMZN) and Samsung compete at the same price point for a Wi-Fi-only tablet. The good news for the company is that the least expensive iPad 2 from Apple Inc. (NASDAQ: AAPL) is still more than double the price of the tabeo, and the new Surface tablet from Microsoft Corp. (NASDAQ: MSFT) is supposed to ship on October 26th at a $199 price point, although there is some question about that.

More risk is piled on by the number of tablets already available for kids, all of which have quickly dropped their prices to match the tabeo’s price. A tablet that did not include a way to connect to the Internet, the LeapPad from LeapFrog Enterprises (NYSE: LF) was a big seller during last year’s holiday season at $99.

The Tabeo uses the Android operating system from Google Inc. (NASDAQ: GOOG) and will come pre-loaded with 50 free games and Toys “R” Us has created a proprietary app store that will open with 7,000 more titles.

Toys “R” Us might have a winning product here, but the company has picked a tough battleground, surrounded by bigger tech companies and its own product suppliers.

How the Pandemic Boosted AutoZone Earnings