For the first time, North Dakota ranks as the best run state in the country. In recent years, North Dakota’s oil boom has transformed its economy. Last year, crude oil production rose 35%. As of August, 2012, it was the second-largest oil producer in the country. This was due to the use of hydraulic fracturing in the state’s Bakken shale formation. The oil and gas boom brought jobs to North Dakota, which had the nation’s lowest unemployment rate in 2011 at 3.5%, and economic growth. Between 2010 and 2011, North Dakota’s GDP jumped 7.6%, by far the largest increase in the nation. This growth has also increased home values, which rose a nation-leading 29% between 2006 and 2011. North Dakota and Montana are the only two states that have not reported a budget shortfall since fiscal 2009.

Wyoming is not the best-run state in the nation this year. The drop is largely due to the state’s contracting economy. In 2011, GDP shrunk by 1.2%, more than any other state. As a whole, however, the state is a model of good management and a prospering population. The state is particularly efficient at managing its debt, owing the equivalent of just 20.4% of annual revenue in fiscal 2010. Wyoming also has a tax structure that, according to the Tax Foundation, is the nation’s most-favorable for businesses — it does not have any corporate income taxes. The state has experienced an energy boom in recent years. The mining industry, which includes oil and gas extracting, accounted for 29.4% of the state’s GDP in 2011 alone, more than in any other state. As of last year, Wyoming’s poverty, home foreclosure, and unemployment rates were all among the lowest in the nation.

Last year, Nebraska had the second-lowest unemployment rate in the nation at 4.4%. In Lincoln, the state capital, the unemployment rate was 4%, lower than all metropolitan areas in the country, except Bismarck and Fargo in North Dakota. Although far from the nation’s wealthiest state — median income was slightly lower than the U.S. median of $50,502 — Nebraska’s economy is strong relative to the rest of the U.S. The state is one of the leading agricultural producers, with the sector accounting for 8.3% of the state’s GDP last year. The state also had the second-lowest debt per capita in the country in fiscal 2010, at $1,279, compared to an average of $3,614 for states nationwide.

Click here to see every state  with a  budget shortfall in the fiscal year 2011: 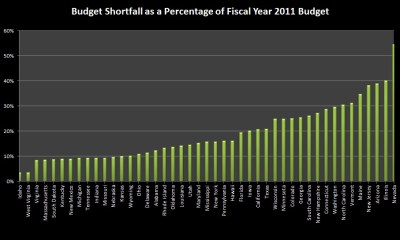 In fiscal 2011, Utah had a budget deficit of $700 million, equal to 14.7% of the state’s GDP. This debt-to-GDP ratio is worse than half the states in the U.S. Despite these problems, Utah has committed to reducing expenses in place of raising taxes or increasing debt. The state has also limited its borrowing. Its total debt was just under $6.5 billion in fiscal 2010, or $2,356 per capita — less than most states — and 40.4% of 2010 tax revenue. Both Moody’s and S&P gave Utah their highest credit ratings because of the state’s strong fiscal management. Moody’s commented that Utah has a “tradition of conservative fiscal management; rebuilding of budgetary reserves after their use in the recession; [and] a closely managed debt portfolio.”

Like many of the other well-run states, Iowa is one of the nation’s top agricultural centers — the industry accounted for 6.6% of the state’s GDP in 2011. The farm economy has contributed significantly to growth, with farm earnings rising rapidly and land values skyrocketing. State GDP rose by 1.9% between 2010 and 2011 — the 12th-highest increase in the country. Iowa’s unemployment rate fell from 6.3% in 2010 to just 5.9% in 2011, the nation’s sixth-lowest rate. The state has carried a low debt burden in recent years, averaging just $1,690 per capita in fiscal 2010, among the nation’s lowest. The state currently has the best possible credit ratings both from Moody’s and S&P.

Like North Dakota and Wyoming, Alaska benefits from the active extraction of its abundant energy resources. Last year, mining — including the extraction of oil and natural gas — accounted for nearly 25% of the state’s GDP, trailing only Wyoming. Energy was not the state’s only valuable resource and only its third-largest export behind fish, and minerals and ores. Only three states exported more goods, on a per capita basis, than Alaska’s $7,248 in 2011. Alaska’s $68,000 income per household is second highest after Maryland. In 2011, the state reported no budget deficit, despite the fact it had more than $9,000 in debt per capita in 2010, the second-highest debt burden in the country. The state also had among the nation’s lowest tax burden, with state and local taxes equal to just 7% of income.

Unlike North Dakota, South Dakota is not a large producer of fossil fuels. Agriculture contributes roughly the same amount to both economies. Last year, no state in the country derived a larger percentage of its GDP from agriculture than North Dakota’s 8.4% and South Dakota’s 10.9%. South Dakota has very low taxes and is considered to have one of the nation’s most business-friendly tax climates. In fiscal 2010 it had the second-lowest state and local tax burden, at 7.6% of income. Also in fiscal 2010, the state funded 96% of pension obligations to its employees. Although the state’s governor, Dennis Daugaard, proposed to eliminate tenure for teachers, voters rejected the measure in November. More than 90% of South Dakota adults are at least high school graduates, the tenth-highest percentage in the country.

Click here to see the median income for households in each state: 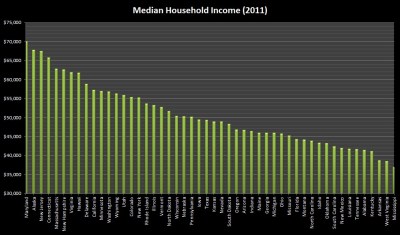 Despite its recent large debt burden, Vermont is one of the nation’s best run states. The state has promoted education in its budgets — in fiscal 2010 it allocated 40% of its budgeted spending to education, more than any other state except Iowa. As of last year, 91.8% of adults had a high school diploma — one of the nation’s highest percentages. Vermont also has several programs intended to make health care affordable and accessible for all residents. As of last year, just 6.6% of the population did not have health insurance, less than half the 15.1% nationwide and the second-lowest rate in the U.S.

Economically, Virginia has been in very good shape compared to many other states in the region. The state’s poverty and unemployment rates are among the nation’s lowest, while median household income is one of the nation’s highest, at nearly $62,000. Given that the state is home to the Pentagon and large defense contractors, it could be hit with job cuts if the nation goes over the fiscal cliff. The automatic defense cuts set to take place if that happens mean Virginia could lose more than 207,000 jobs, an estimated 136,000 of which would be related to the Department of Defense. As of 2011, government spending accounted for 18.7% of Virginia’s GDP, the fourth-highest percentage in the nation.

Minnesota ranks as one of the best-performing states in the nation by several measures. The state has the second-highest rate in the country — 92% — of adults with a high school diploma, while just 8.8% of the population lacks health insurance, the fourth-lowest figure in the U.S. Minnesota also has one of the nation’s lowest poverty rates, as well as the eighth-lowest crime rate in the U.S. at 221.2 violent crimes per 100,000 residents. On the other hand, Minnesota had one of the highest state and local tax burdens in the nation, at 10.8% of income in fiscal 2010. Democrats recently won control of the state legislature, and are expected to attempt to reform the state’s tax structure and possibly increase taxes on the wealthy.

Click here to see the Worst Run States in America