A very large part of Louisiana’s economy relies on its role as a hub for the Gulf of Mexico oil extraction and refining sector. The state’s mining industry, which includes oil extraction, contributed $27.4 billion last year to the state’s GDP, second only to Texas. While it has been more than seven years since Hurricane Katrina struck New Orleans, the state is in many ways still dealing with the consequences of the storm. The state had one of the highest violent crime rates in the country in 2011. New Orleans, itself, had the highest murder rate in the country in 2011. Due in part to a lack of tax revenue, the state now spends the tenth-smallest proportion of its budget on social welfare. The state has recently made further cuts to its programs, including Medicaid.

Florida was easily the state most affected on the East Coast by the housing collapse. As of 2011, 15.6% of the state’s GDP came from the real estate, more than all but two states.The still-foundering housing industry is a major sourceof Florida’s problems. Between 2006 and 2011, median home value in Florida plunged by 34.5%, from $230,600 to $151,000. Last year, more than one in every 50 homes were in foreclosure, one of the highest rates in the country. Florida’s GDP grew by just 0.5% in 2011, at just a third of national GDP growth. The state’s unemployment rate last year, at 10.4%, was the sixth-highest in the country. According to a report by the Orlando Sentinel, the state is expected to have a budget surplus in 2012, but these gains will not be enough to restore funding to some of the areas that have seen major budget cuts during the recession, such as education, roads, and environmental programs.

Also Read: The Companies Where Everyone Wants to Work

South Carolina’s economy has struggled in recent years. Last year, the state had one of the nation’s highest unemployment rates, as well as among the lowest median household income in the country. In recent years, South Carolina’s finances have been strained, with the state having proportionally larger budget shortfalls and unfunded pension liabilities than most other states. In January, the state instituted a controversial policy requiring adults who have collected unemployment benefits for at least five months to accept a job that pays minimum wage.

Click here to see the percent of people with a high school diploma in each state: 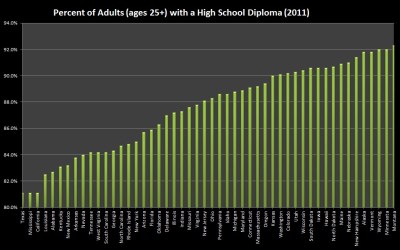 While New Mexico’s unemployment rate of 7.4% was 1.5 percentage points below the national figure, the average citizen isn’t that well off. New Mexico had the second-highest poverty rate in the country in 2011, with 21.5% of residents living below the poverty line. The state exported just $1,003 worth of goods per capita in 2011, the second lowest amount of all states. The state currently has some challenges, much of which are beyond its control. It has spent significant resources putting out a massive outbreak of wildfires this summer. Another concern for New Mexico is the fiscal cliff, which could hit the state especially hard due to its heavy reliance — compared to most states — on federal spending.

Perhaps no other state has suffered from the housing crisis as much as Nevada. Between 2006 and 2011, the median home value plummeted 49.9%, from $315,200 to $158,000, the largest decline in the nation. As of last year, one in every 16 homes was in foreclosure, the highest rate in the nation. In fiscal 2011, no state had a larger budget shortfall than Nevada. Last year, Nevada also had the second-highest rate of workers without full-time jobs, at 22.7%, and the highest unemployment rate of any state, at 13.5%. This was 4.6 percentage points above the nationwide unemployment rate of 8.9%.

Between 2010 and 2011, New Jersey’s GDP contracted by 0.5%, more than all but three other states. The state’s median household income and poverty rate were both third best in the nation. On the other hand, the state’s tax burden on its residents was second highest in the U.S. in 2010. Residents paid 12.4% of their income in state and local taxes, higher than any other state except New York. The state has many budget problems, as well. New Jersey’s debt as a percentage of revenue was 91.6%, the fifth-highest of all states.

Between 2006 and 2011, the value of homes in Arizona tumbled by 35%, more than every state except for Nevada. The state also had the nation’s second-highest foreclosure rate in 2011, with one in every 24 homes in foreclosure. In the aftermath of the financial crisis, Arizona had some of the nation’s largest budget shortfalls. In fiscal 2010, the state had a shortfall of $5.1 billion, equal to 65% of its general fund. In fiscal 2011, Arizona’s budget deficit was 39.0% of its general fund, the third-highest in the nation. In the recent state elections, residents voted on several measures intended to shore up the state’s finances. Voters rejected the continuation of a sales tax hike, while approving the restructuring of the state’s property tax assessment system.

Although many states have budget issues, Illinois’ faces among the biggest problems. In 2010, the state’s budget shortfall was more than 40% of its general fund, the second-highest of any state. Both S&P and Moody’s gave Illinois credit ratings that were the second-worst of all states. In addition, the state only funded 45% of its pension liability in 2010, the lowest percentage of any state. Governor Patrick Quinn has made the now-$85 billion pension gap a top priority for the new legislative session beginning in January.

Rhode Island’s finances were a mess in fiscal 2010. The state had $9.5 billion in unpaid debts, which came to 107.2% of that year’s revenues.At more than $9,000 per person, it’s one of the largest debt burdens in the country. The state also funded less than half of its pension obligations, worse than all states except for Illinois. In 2010, in a spectacular example of fiscal mismanagement, the state guaranteed a $75 million loan to a video game company, which has since defaulted. With one of the nation’s slowest growth rates and the third-highest unemployment rate in the U.S., at 11.3%, Rhode Island’s economy performed poorly overall..

California is 24/7 Wall St.’s “Worst Run State” for the second year in a row. Due to high levels of debt, the state’s S&P credit rating is the worst of all states, while its Moody’s credit rating is the second-worst. Much of California’s fiscal woes involve the economic downturn. Home prices plunged by 33.6% between 2006 and 2011, worse than all states except for three. The state’s foreclosure rate and unemployment rate were the third- and second-highest in the country, respectively. But efforts to get finances on track are moving forward. State voters passed a ballot initiative to raise sales taxes as well as income taxes for people who make at least $250,000 a year. While median income is the 10th-highest in the country, the state also has one of the highest tax burdens on income. According to the Tax Foundation, the state also has the third-worst business tax climate in the country.

Click here to see The Best Run States in  America