Perhaps no state budget has generated as much controversy in recent years as Wisconsin’s. In early 2011, Governor Scott Walker proposed a budget repair bill, requiring state employees to contribute 50% of their annual pension payment, while eliminating the collective bargaining rights of most state workers. Prior to its passage, Wisconsin faced multi-billion dollar budget deficits, including a $3.5 billion shortfall in fiscal 2011, or 24.9% of the state’s budget — one of the larger deficits in the country in that year. These deficits occurred every year, despite one of the nation’s highest income tax burdens of 11.1%. In fiscal 2010, the state had the nation’s only fully funded pension program, although all contributions were paid for by the state.

An estimated 16.5% of Idaho residents did not have health insurance last year, one of the higher rates in the country. This is particularly problematic in a state with one of the nation’s highest doctor shortages. In 2010, Idaho had just 172.5 active patient care physicians per 100,000 residents, fewer than all but three states. Last year, the state made major cuts to its Medicaid program, the effect of which was compounded by the loss of matching funds from the federal government. Despite it’s problems with health care, the state appears to budget conservatively. In fiscal 2011, it had a budget shortfall of only 3.5%, one of the smallest in the country.

Indiana has a strong manufacturing sector, accounting for 27.6% of the state’s total GDP, the second-highest percentage of any state in the nation, trailing only Oregon. The state is also a strong exporter, with $4,941 in exports per capita, the 11th highest in the nation. The sectors that contributed most to Indiana’s manufacturing output in 2010 — motor vehicles and chemicals — produced the state’s two leading exports last year, namely transportation equipment and chemicals. Although the state has had some financial difficulties — it had large amounts of debt as a percentage of revenue and unfunded pension obligations in fiscal 2010 — it currently has top credit ratings from both Moody’s and S&P. The state is also able to court businesses with one of the nation’s most business-friendly tax climates.

Click here to see the unemployment rate in each state for 2011: 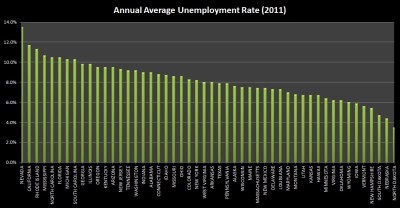 West Virginia is one of the poorest states in the country. Median income in the state was just $38,482 in 2011, lower than any state but Mississippi. The state also had the tenth-highest poverty rate in the U.S., as well as one of the lowest proportions of adults with a high school diploma. Several indicators suggest conditions may be improving in the state. West Virginia’s GDP grew by 4.5% between 2010 and 2011, three times the national rate and more than every state but North Dakota and Oregon. This was fueled primarily by growth in the state’s mining industry, which expanded by 54% to a $9.4 billion industry last year. West Virginia also had the third-lowest foreclosure rate in the country in 2011.

The state’s financial situation is mixed. Missouri is one of ten states to receive a perfect credit rating from both S&P and Moody’s. Its fiscal 2011 budget gap was 9.4%, better than the national average of 19.9%. However, debt as a percentage of revenue was 60.2%, higher than a majority of states. State spending has been reduced in areas such as public higher education, where funds were cut for the third year in a row. But residents have resisted efforts to change course. Earlier this month, Missouri voters narrowly rejected a ballot initiative to raise the state’s cigarette tax to 90 cents a pack, up from a nation-low 17 cents a pack.

Maryland has the nation’s highest median household income at just over $70,000, well above the national median of $50,502. Residents paid 10.2% of their income in state and local taxes in fiscal 2010 — one of the higher rates in the nation. The state’s tax climate is also one of the worst for businesses, according to the Tax Foundation. Maryland was also one of the nation’s smallest exporters, shipping just $1,867 in goods abroad per resident in 2011, well below half the national figure of $4,752. As of August, tax revenue collections had exceeded the state’s Board of Revenue Estimates projections by about $225 million. This may help the state avoid a budget shortfall like the one it had in fiscal 2011, when it faced a $2 billion budget deficit, equal to 15.3% of that year’s budget.

In recent years, North Carolina has had a mixed track record. In fiscal 2010, the state had one of the nation’s lowest debts per capita, and 96% of employees’ pension plans were funded — the second-highest percentage in the nation. But in fiscal 2011, North Carolina’s budget shortfall reached nearly one-third of the 2011 budget, higher than most states. The state has struggled with especially high unemployment rates, which at 10.5% in 2011 is tied for the sixth-highest in the nation. Despite these problems, North Carolina maintains perfect credit ratings from both Moody’s and S&P. Additionally, Site Selection, a magazine covering corporate real estate strategy, ranked North Carolina’s business climate as the nation’s best.

Click here to see the amount of debt per capita in each state for the fiscal year 2010: 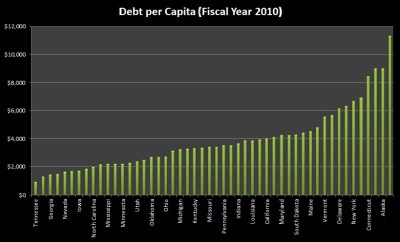 In fiscal 2010, few states had lower debt per capita than Alabama’s $1,841. And while the state did face a budget shortfall in fiscal 2011, it was smaller than most states’, at just 12.3%. Because the state faces difficult times ahead, Alabama has approved the use of state trust funds to help support certain operations, such as Medicaid and prisons. Matters are especially bad in Alabama’s Jefferson County, which entered bankruptcy in November 2011 after losing money on complicated debt and interest rate contracts.

Colorado’s finances were not well-managed in recent years. In fiscal 2010, the state’s ratio of debt-to-revenues and the percentage of pension liabilities funded were worse than most states. Few states spent less of their fiscal 2010 budget on public welfare than Colorado’s 18.4%. In fiscal 2011, the state’s budget shortfall equaled one-quarter of its budget, among the nation’s higher rates. Still, according to Governor John Hickenlooper, “The overwhelming approval of Colorado’s most recent budget indicates the state is a place where people get work done, and they get it done collaboratively and pragmatically.” Colorado’s economy faces several major challenges. Homeowners are struggling — the state had one of the nation’s highest foreclosure rates — and the state was one of the nation’s weakest exporters, at just $1,433 in exports per capita.

Ohio relies heavily on the manufacturing industry, but a national decline in the sector has hurt the state economy. In the most recent years, the economy has been stagnant. Unemployment is near the national average. GDP grew by 1.1% in 2011, less than the national GDP growth of 1.5%. Ohio’s potential for new business is limited by what the Tax Foundation defines as one of the more unfavorable business tax climates in the country. Moreover, around this time last year, Ohio voters repealed a law curtailing collective bargaining in the state, which many leaders argue will hinder the state’s ability to attract new businesses. The state appears to be managing its finances well, with a respectable 12th-lowest debt-to-revenue ratio in fiscal 2010.