What Could Make Boeing the Best DJIA Stock of 2015 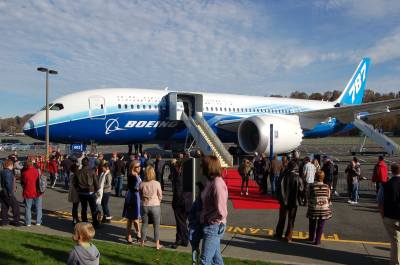 Source: The Boeing Co.
As 2014 comes to a close, a question arises about which of the 30 Dow Jones Industrial Average (DJIA) stocks will be the one to lead the pack in the coming year. After Boeing Co. (NYSE: BA) failed to keep pace with its performance from 2013 with gains of about 84%, 24/7 Wall St. wanted to see what scenarios could help it be among the best-performing DJIA stocks of 2015.

The first consideration is that Boeing shares were down almost 1% year-to-date as of the close of Friday, December 5 — and at one point it was down about 13% in 2014. When 2014 started out, analysts were expecting Boeing shares to rise about 10% in all of 2014. It is too soon to start determining which DJIA stock will be the best-performing in 2015, but Boeing was the best performing DJIA stock of 2013 and was most recently ranked as only number five of all 30 DJIA stocks with its -1% performance to date.

Without trying to predict this as a real expectation with almost a month to go before 2015 starts, 24/7 Wall St. wanted to look at what might actually make Boeing be the top-performing DJIA stock of 2015. First and foremost, Boeing needs to make sure that its production is in line with its sales, and that starts with the full-year guidance for deliveries. For 2014, the company predicted deliveries of between 715 to 725 aircraft. In order for Boeing to make these deliveries, it has to make the sales. In 2014, the story for this airline producer began with cracked wings in the 787 Dreamliner at the beginning of the year.

Another issue that was more psychological than formal was the mystery surrounding the Malaysian Air jet, a Boeing 777, that went missing. No remains from the crash were found and there are still only questions. Some reports discussed potential terrorism, some discussions were around pilot sabotage, some speculated over a rapid mid-air disintegration and other theories abound. The reality is that nobody knows for sure, and they may now never get any real answers.

The 787 Dreamliner faced many initial delays and many issues before its launch. Now the issues seem to be around whether airlines will buy this plane or other large aircraft instead. The lower oil prices will only add in one more unknown about whether airline carries will spend up for fuel-efficiency when oil (and jet fuel) prices have tanked.

As a result of this series of unfortunate events, Boeing’s sales dipped, and reasonably so, with its clients often opting for competitor Airbus. However, for the coming year Boeing has planned ahead and already contracted Alcoa to be an exclusive provider of light-weight aluminum lithium wing skins. Assuming the quality holds, there are no foreseeable problems on the manufacturing or mechanical side for this airplane manufacturing giant.