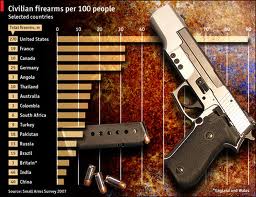 A cynic might say that the best thing that happened to firearms business was the election of Barack Obama in November 2008. Gun makers and owners, always distrustful of a Democratic administration, feared that the new administration would ban sales of semiautomatic weapons, so everyone was trying to buy before the administration took office. Then fears grew that ammunition sales would be curtailed, and ammo flew out the doors as fast as it could be made. Some stores were forced to limit sales of popular calibre ammo due to extremely high demand.

As with so many things these days, US gun sales have followed the economic outlook. In the first half of 2009, when doom and gloom about the economy was very high, gun sales soared as people bought firearms for personal protection, fearing that unemployment would lead to a rise in crime.

Depending on which side of the gun-control issue one believes, the drop in numbers means either that a well-armed citizenry prevented crime or that gun buyers wasted their money.

Yet any way one looks at it, guns and ammo sales are up. The FBI’s National Instant Check System and payments to states from federal excise tax collections on sales of guns and ammo are up more than 25% in FY 2010, to more than $470 million. In August 2010, the FBI has conducted more than 1 million background checks, and 2010 is on a pace to meet or, more likely exceed, the 14 million background checks completed in 2009.

S&W shares are down nearly 9%, back up slightly after hitting a new 52-week low earlier this morning.