No wonder so many large retail chains continue to close stores, and will do more in the future. As e-commerce sales rise as a portion of total retail, a huge portion of the market belongs to Amazon.com Inc. (NASDAQ: AMZN), leaving other retailers to fight for much more modest market share. Based on new research, Amazon took nearly a third of all Cyber Weekend sales.

Cyber Weekend has passed and data from Slice Intelligence shows online Black Friday sales were up 20%, while Cyber Monday sales grew 10% this year. Sales so far in November are 15% higher this year, relative to 2015.

Over 30 percent of the revenue generated during Cyber Weekend went to Amazon, making it the retail winner for the early holiday season. Nearly seven percent of sales went to Best Buy, which is up from six percent in 2015. Apple also made gains with their Black Friday sale and was the eighth largest retailer over this period. Conversely, both Walmart and Macy’s saw their share drop slightly over Cyber Weekend compared to last year.

The news is good for Best Buy Co. Inc. (NYSE: BBY), which has been a particular target of Amazon’s huge consumer electronics segment, much of which encompasses its own hardware products such as Echo, Alexa and Kindle.

Apple Inc.’s (NASDAQ: AAPL) data points to a picture that is less clear. Many of its sales go through consumer electronics stores and those of the three wireless carriers. An iPhone could be bought at Best Buy.

The data is particularly troubling for Wal-Mart Stores Inc. (NYSE: WMT), which has struggled to keep customers from moving to Amazon. It has invested hundreds of millions of dollars on e-commerce and recently paid $3.3 billion for start-up Jet.com as a means to increase its online footprint.

Slice points out that the traditional wisdom about retail is true. There is Amazon, and then everyone else. Those in the latter category are dying. 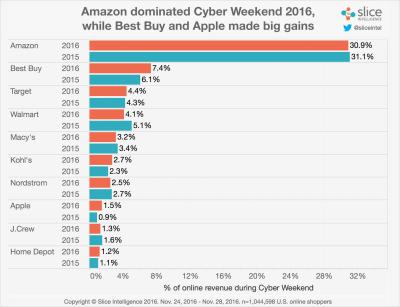