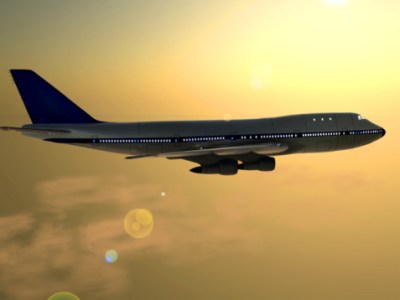 Source: Thinkstock
The U.S. airline industry had one of the more turbulent decades in its history. In the past few years, the majority of the country’s largest carriers have merged with a competitor or gone into bankruptcy, some of them multiple times.

In order to stay profitable in the current market, many airlines have raised or added fees in the past several years. Airfarewatchdog.com surveyed the fees of 14 major domestic airlines charge, finding 14 different extra charges. Some fees — such as charging for changing a flight, for checked bags, and even for blankets and pillows — have been met with outrage by travelers. 24/7 Wall St. reviewed Airfarewatchdog.com’s survey to identify the air carriers with the worst fees and ranked all the carriers, best to worst.

These days, U.S. carriers operate in a hyper-competitive market. Travel sites such as Travelocity, Orbitz, and Kayak have forced U.S. Air, American Airlines, and United to lower their fares. In fact, the fares have gone down so much that the carriers are losing money on many of their flights.

In an interview with 24/7 Wall St., Airfarewatchdog.com founder George Hobica explained that it is the sustained pressure on airlines to keep their fares low that has caused their declining profitability and forced them to levy increased fees. Adjusted for inflation, he explained, airfares are lower today than they were 20 years ago. Even with the extra fees, he added, the amount of money per passenger the airlines make remains well below what they made more than a decade ago.

A look at the Bureau of Transportation Statistics’ chart of 3rd quarter average domestic ticket sales from 1995 to 2012, adjusted for inflation: 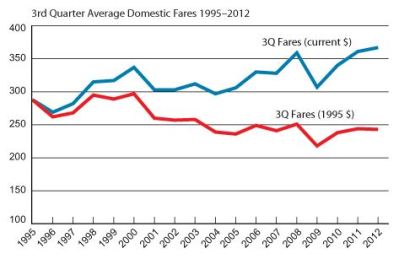 The airlines with the greatest financial difficulties also tend to charge higher fees in order to help them stay afloat. American Airlines, which has by our calculation the highest fees, lost more than $1.1 billion in operating revenue in 2011, leading up to its second bankruptcy. The airlines that charge the lowest fees, like Southwest, and Alaska, remain profitable.

The main difference between Airlines such as Southwest and Alaska are able to remain profitable and consequently charge lower fees, while others such as U.S. Air, United, and American cannot is age, said Hobica. The low-fee airlines are younger, with younger fleets, which cost less money to maintain. Also, they have younger employees who do not need to be paid as much as legacy employees at older airlines. This is one of the key reasons, Hobica explained, “U.S. airlines are behind the eight-ball: they have labor rules [and] they can’t fire these people.”

Hobica explained this makes sense considering the history of these larger, older airlines. “Some of the newer airlines, like JetBlue and Virgin America — their employees have not been battered as much as some of the mainline carriers like American, United, and Delta. A lot of these employees lost their pensions and have been mistreated by the management, and so they’re more jaded,” he said.

Using Airfarewatchdog.com’s report on the type of fees each of the 14 major U.S. domestic carriers charges, 24/7 Wall St. totaled the amount a passenger would pay if he or she paid at least the minimum fee in each of the 14 fee categories. These categories include fees for additional checked bags, overweight bags, food and drink, flight change fees, and booking fees. In addition to the fee data from Airfarewatchdog.com, we considered airline operating profit and revenue, as collected by the Bureau of Transportation Statistics. We also reviewed customer satisfaction scores for many of these airlines, which we obtained from the American Customer Satisfaction Index.