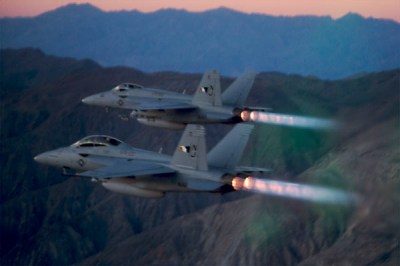 Source: The Boeing Co.
In what may seem to be an odd twist, Boeing Co. (NYSE: BA) and arch-rival Airbus have teamed up with local partner Korean Airlines to bid on development of a new military fighter plane. The triumvirate is proposing Boeing’s F/A-18E/F Super Hornet as the base design for South Korea’s KF-X development program.

The partnership with Airbus is intended to assist Boeing in avoiding U.S. government restrictions on the technology that the company can sell to foreign countries. Airbus is likely being brought on board to supply stealth technology for the Korean fighter because Boeing is prohibited from doing so, according to Aviation Week.

Boeing had bid on another fighter plane for South Korea, the F-X Phase 3, with an Israeli aerospace firm, but that program was awarded in September to Lockheed Martin Corp. (NYSE: LMT) as a sole source to supply 40 of the company’s F-35A fighter planes for a reported total of $7 billion. The KF-X program is reportedly worth another $8.2 billion, although the South Korean government has not approved any spending on the program yet.

The Boeing-Airbus proposal for the KF-X is expected to be an “economical alternative” to South Korea’s plan to have the country’s own plane builder, Korea Aerospace Industries, design and build an entirely new plane with technical help from Lockheed Martin. The country would then try to sell its indigenous plane to countries that could not afford to buy U.S.-made fighters. The initial goal is to build 120 KF-X planes for the country’s own air force beginning in 2025.

Boeing and Airbus are competing against each other to sell four tanker planes to the Korean government in a deal worth a reported $1.25 billion.

Boeing lost the F-X Phase 3 contract to Lockheed Martin, even though it was the only bidder to meet the price ceiling set by the Korean government.

If the South Korean government decides it wants to build the plane from the ground up in order to move into the arms exporting business, Boeing could lose again no matter how economical its alternative program is.