Is Boeing Holding Back Order Announcements Ahead of Paris Air Show? 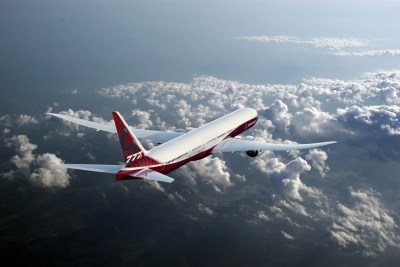 Source: The Boeing Co.
Boeing Co. (NYSE: BA) announced new orders for two 737s Thursday morning, bringing the 2015 total to 159 gross orders and 134 net orders through May 26. The company finished April with 128 net new orders, so it has taken just six new orders so far in May. A commitment for 60 737 MAX aircraft from three Chinese companies is not included in the order total for May.

The biennial Paris Air Show begins June 15, and investors can expect Airbus to dominate new order announcements. The show is, after all, being held on Airbus’s home field. At the 2013 Paris Air Show, Airbus wrote orders for 466 planes valued at $68.7 billion, and Boeing took 442 orders valued at $66 billion. While it may be optimistic to expect similar order levels again this year, anything is possible.

Actually, for the two companies to take that many orders this year would be miraculous. Demand remains strong, but both companies have backlogs of eight to 10 years, and any orders placed now have a long wait for a slot on the production line. Seasoned observers are not looking for anything like the 2013 order totals, but Boeing does not want to lose the PR skirmish to Airbus, and neither is likely to announce significant additions to their order tallies ahead of the biggest air show of the year.

Still, there are a couple of things worth watching for from Boeing’s appearance in Paris: Will another carrier join Ryanair Holdings PLC (NASDAQ: RYAAY) and take the 737-200. And will there be any new orders for the current version of the 777?

A second customer for the 737-200 would be a good thing for Boeing. Ryanair, Europe’s largest low-fare airline, persuaded Boeing to add 11 seats to the 189 already planned for the 737 MAX 8 to create a model called the 737-200. Ryanair placed an order for 100 of the new planes in December. A second customer for the plane would validate Boeing’s decision to take the Ryanair order, but this might qualify as a long-shot.

The news for Boeing on the current model 777 may be an even longer shot. Leeham News and Comment reported earlier this week that Japanese parts suppliers for the 777 have said they expect Boeing to cut production from the current 8.3 per month (100 per year) to seven per month by the end of next year and to six per month in 2017, before leveling off at five per month until the first 777X rolls into service in 2020. That totals 376 of the current model 777.

Boeing’s order book at the end of April showed 224 unfilled orders for the 777-300ER passenger jet and 46 for the 777F freighter, for a total of 270. Boeing has said that it is confident it can fill the order book for the 777, but analysts and investors certainly would like to see some evidence.

ALSO READ: Has the Endless Growth of Dividends and Buybacks Peaked?