Will Boeing Add 2 New Planes to Its Fleet?

Boeing Co.’s (NYSE: BA) CEO, Dennis Muilenburg, thinks that the company can reasonably design and build two new commercial passenger jets in a time frame that meets competitor Airbus’s planned entry into service of its A321neo and steals a march on the European maker’s plan to address the demand for a plane to fill the gap between the company’s 737 and 787, the so-called middle-of-the-market.

A competitor to the A321neo, which has been dubbed the 737-10X, could be ready for the market by 2019 or 2020, according to Muilenburg. Such an aircraft is a stretched version of the 737-9 that seats 180 passengers in a dual-class configuration into the new plane designed for up to 198 seats.

According to a report in Aviation Week, the company needs to answer four main questions before it commits to a 737-10X:

First, if it launches any further stretch variant at all, how much of a derivative will be enough to win a share of the estimated 17% bigger-capacity market? Second, will such a derivative maintain the value of family commonality while still being sufficiently different to prevent potential cannibalization of the 737-9 market? Third, depending on the level of change, can the variant be brought to market in a timely and affordable manner? Lastly, is the potential -10X market important enough to merit the disruption to the production system a new derivative might bring?

How Boeing answers those questions will affect the company’s plans for a clean-sheet design of the middle-of-the-market aircraft the company has called the new midsize aircraft (NMA) that would carry up to 270 passengers on flights as long as 5,000 nautical miles. The NMA would be projected to enter service around 2025 and depends largely on the ability of engine makers to develop a new engine with 40,000 to 45,000 pounds of thrust.

A larger Airbus plane, the A321LR, could seat up to 240 passengers on flights of up to 4,000 nautical miles by simply adding three fuel tanks in the space currently used for baggage and freight. The stretched 737-10X, shown here next to the 737-9, could ring up $2 billion in development charges, a relatively inexpensive cost in the aircraft world. 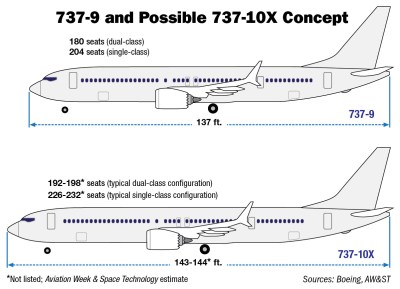 If Boeing ultimately decides to build two new aircraft, the decision will turn on how many planes the company believes it can sell. Earlier this month Boeing estimated demand for its NMA jet at 2,000 to 5,000. Because that plane would be more costly to develop, the company needs to assure itself that a 737-10X would not cannibalize the market before the NMA is off the drawing board and into production.

That could be trickier than ever, given recent indications that low-cost carriers (LCCs) such as Norwegian Air are planning to use new 737 MAX 8s (due next spring) for long-haul flights. Leeham News noted that the new 737 MAX and A320neo planes can fly routes of up to 3,200 nautical miles in their standard models and that the A321LR adds another 300 nautical miles to that.

The big question then for Boeing is whether the LCCs will drive the costs of flying from, for example, Western Europe to the east coast of the United States, so low that the market for an NMA evaporates. The jury is still out on that.