America's Most and Least Dependable Cars

Of the 31 automobile brands ranked in the 2019 U.S. vehicle dependability study conducted by J.D. Power, the Lexus brand from Toyota Motor Corp. (NYSE: TM) topped the ranking for the eighth straight year. Porsche and Toyota brand tied for second. For the first time in the 30 years that J.D. Power has conducted this survey, mass-market brands scored better overall than luxury brands.

The Lexus had a problem per 100 (PP100) score of 106, slightly better than the Porsche and Toyota brands that both scored 108. The Chevrolet brand from General Motors Co. (NYSE: GM) posted a score of 115 to finish fourth in the ranking, just ahead of last year’s third-place finisher, Buick, which scored 118 this year to rank fifth overall.

The study was conducted from October through December of 2018 and surveyed nearly 33,000 car owners of 2016 model year vehicles after three years of ownership. Overall dependability is determined by the number of problems experienced per 100 vehicles, and the study included 177 specific problem symptoms grouped into eight major categories. A lower score is better.

Vehicle dependability continues to improve, but I wouldn’t say that everything is rosy. Vehicles are more reliable than ever, but automakers are wrestling with problems such as voice recognition, transmission shifts and battery failures. Flawless dependability is a determining factor in whether customers remain loyal to a brand, so manufacturers need to help customers who are currently experiencing vehicle problems and address these trouble spots on future models.

At the opposite end of the rankings, the namesake Fiat brand from Fiat Chrysler Automobiles N.V. (NYSE: FCAU) posed a PP100 score of 249, giving back more than half the year-over-year gain of 106 points it showed in 2018’s study. Land Rover, owned by India’s Tata Motors, posted a second-worst PP100 score of 221, and Volvo, a division of China’s Geely, was third-worst with a score of 204. 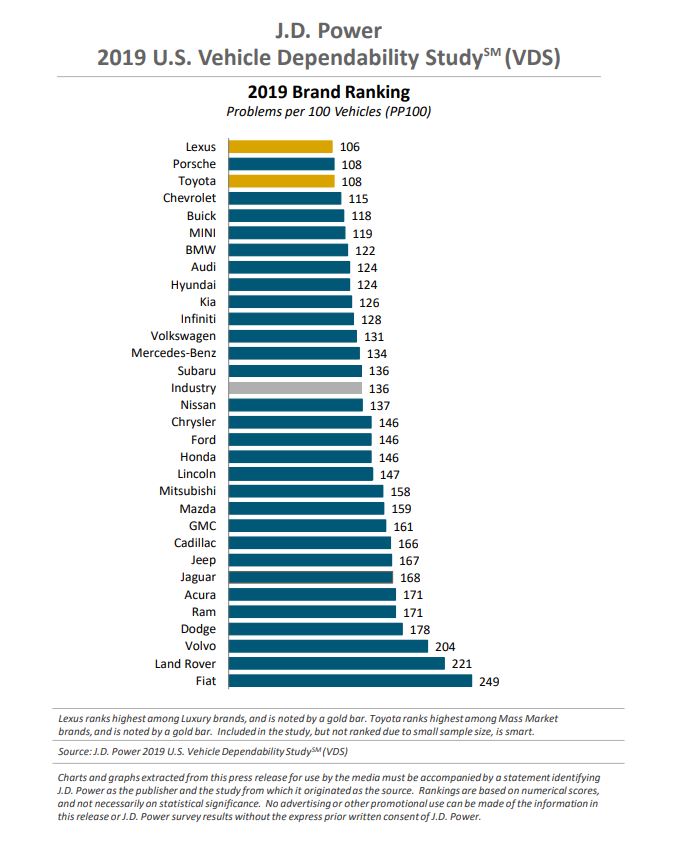 No brand from Fiat Chrysler scored above the industry average of 136. The Chrysler brand came closest with a score of 146, while Jeep scored 167, Ram trucks scored 171 and the Dodge brand scored 178. Dodge and Ram posted the fourth and fifth worst scores of all 31 brands.

The Acura brand from Honda Motors Co. Ltd. (NYSE: HMC) posted a PP100 score of 171 to rank with Ram, and Jaguar, also owned by Tata, posted a score of 168. The Honda brand itself scored 146, below the industry average by 10 points.

GM’s lowest scoring brand was its luxury Cadillac with a PP100 score of 166, just ahead of the GMC brand with a score of 161.

J.D. Power does not publish model ranking scores, but the Porsche 911 was the most dependable model in the first year that Power issued the award. Also, in the 30-year history of the survey, this is the first time that all major German automakers — VW, BMW, Audi, Mercedes, and Porsche — scored above the industry average for dependability.

Toyota Camry was the top midsize car in its market segment, with the BMW 5 series as the top-ranked midsize-premium car and the Buick LaCrosse getting top marks in the large car segment.

The Chevrolet Equinox was the top-ranked compact SUV and the Toyota Tundra gained the top spot in large pickups. The Chevrolet Silverado HD was the top heavy-duty pickup, and the Ford Expedition was the top model in the large SUV segment.

ALSO READ: The 15 Best Dividend Stocks for Retirees to Own

The brand ranking list is included below. Visit the J.D. Power website to see the full segment rankings and more details from the survey.

This Is America's Slowest-Selling Car

Why Tesla's Short Interest Tripled From a Year Ago

Short Sellers Still Pulling Back From Tesla, Most Other EV Makers