Goldman Sachs Group Inc. (NYSE: GS) is feeling some pressure on analyst rating actions.  Many traders and investors have thought that Goldman Sachs would remain immune from the entire credit crunch, immune from trading losses, immune from write-downs, immune from private equity and more.  If you read analyst reports of today you will get a general feeling that this may not be the case.

If you are a pure technician that likes to look at charts only, then you’ll really want to consider the coincidental junctures where fundamental analysis meets or fights with technical analysis.

We have seen two key analyst actions and one secondary analyst action,with the largest action coming from Deutsche Bank with a downgrade toHOLD from BUY.  Deutsche Bank is worried that it won’t be immune tomarket woes and that its advantage compared to last year will be lessgoing forward.  Mike Mayo at Deutsche took down his estimates for thisquarter to $2.40 from $3.25 EPS.

The second action is partly on the same reasoning and partly on whatmay lie ahead.  Star banking analyst Meredith Whitney of Oppenheimercame out this morning and lowered estimates for the coming quarter to$2.15 EPS from $3.54 EPS.

A third event was from Buckingham Research, which lowered the rating toACCUMULATE from STRONG BUY.  This may or may not be a piggy back callbut as it is from a boutique it is getting much less attention. 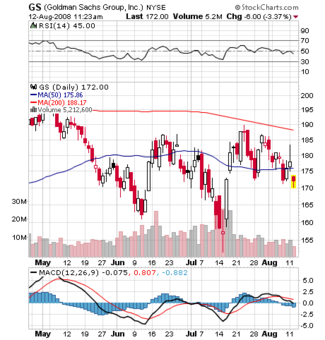 But if you are a technician you don’t care what analysts and reportershave to say (unless it ruins your trade).  What you might be payingattention to now  is that the chart is appearing to be set up formoving average failures.  Here is the stockcharts.com graphic to demonstrate the issue with moving averages.

In May it failed to pierce above the 200-daymoving average with much oomph and then the stock sold off sharply.  Bythe start of June it broke under the 50-day moving average.  Bymid-June its shares rallied back over the 50-day moving average only tosell off again.  Shares have since rallied but have violated the 50-daymoving average on several occasions.  This just happened again todayafter the downgrades, but the violation today so far looks worse thanothers.  in fact, if today doesn’t see an immediate recovery a puretechnician might say that you could see another $10 or more to thedownside in the stock.