In the FED’s most recent bank survey they asked how the banks indented to deal with the Credit CARD Act of 2009.  The Act meant to protect users from sudden interest rate spikes on their credit cards.  Its main provisions limit when lenders can raise rates on existing balances and also require lenders to alert card holders of increases.

Since the FED survey deals only in general with the policy decisions of credit card issuers it remains to be seen what the net benefit of the Credit Card ACT of 2009 will be for consumers.  What is certain is that consumers have come to rely on credit cards less and less since the summer of 2008.  To some degree this has been the result of self-restraint.  Consumers have recognized their need to debt reduction and have acted accordingly.  Tightening on the part of lenders, both in the face of government legislation and in the name of prudence, has also been a factor.  The chart below show the year over year growth rate of consumer credit, and its revolving and nonrevolving components. 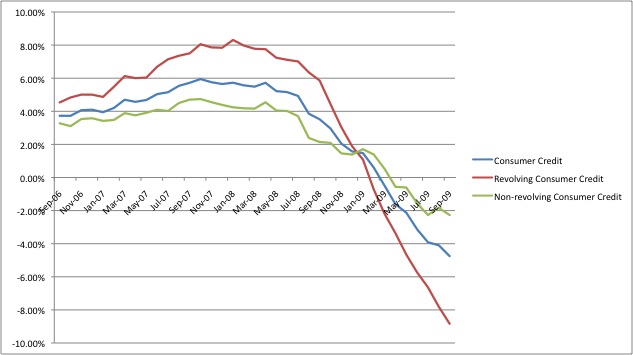 Prior to the credit crisis the largest year over year decline in consumer credit since 1975 was in November of 1991 when consumer credit declined 1.89%.  That record was first broken in May of this year, and the decline reached 4.75% in September.  At the onset the credit crisis revolving credit, which is primarily credit card loans, continued to grow while non-revolving credit had started its decline.  Since late 2008 credit card loans have been in a nosedive, so that on a net basis consumers are repaying their debt.  It is likiley that the banks reaction to credit card legislation will only accelerate this trend, further reducing consumers’ ability to rely on credit in the absence of income.