3 Top Financial Stocks Expected to Break Out in 2015

Oppenheimer released a report Monday morning detailing a few financial stocks that it expects to make big moves in 2015. The financial sector is the favorite rotation idea due to considerable signs of relative trend improvement versus the S&P 500.

Oppenheimer’s view on the S&P 500 is still bullish; however, the analyst firm would note that as the S&P 500 is coming off a new all-time high, the number of New York Stock Exchange stocks notching net new 52-week highs has declined since late October to 120 from 170. Typically rallies that continue are rallies led by many stocks, not few.

Morgan Stanley has been particularly encouraging as it has recently broken above five-year resistance at $36 and is consequently in position to accelerate high in Oppenheimer’s opinion. Morgan Stanley stock was up over 1% at $37.73 on Monday, and its 52-week range is $28.31 to $38.14. It has a consensus analyst price target of $36.93. It was added to Oppenheimer’s S&P 500 Buy List back in September.

Citigroup was added to Oppenheimer’s S&P 500 Buy List in November, based on the prospect of a multiyear breakout above $55 resistance. With the breakout, Oppenheimer believes that the stock is in a position to rally considerably higher. Citigroup is also reversing higher on a relative basis. The company’s shares have been pushing the high side of its 52-week range of $45.18 to $56.95, with the price up fractionally at $56.29 approaching the noon hour. The consensus analyst price target is $59.58.

Hartford is expected to continue to gain momentum following its breakout above $37, which is now support. The stock’s relative trend is confirming this strength too. Shares of the company were up over 1% at $42.09, in a 52-week trading range of $31.96 to $42.22. The stock has a consensus analyst price target of $43.61.

The sector that Oppenheimer sees leading the bulls is the financials, specifically the sector is resuming a multiyear bearish-to-bullish reversal following a year of healthy sideways consolidation. The firm sees the new price high of Financial Select Sector SPDR ETF’s (NYSEMKT: XLF) as the market saying that strong hands want to own financials in a market where many stocks have not been able to make new highs. The ETF was trading up about 1% Monday at $25.05, with a 52-week trading range of $20.50 to $25.07.

A three-in-one chart from Oppenheimer has been provided for Morgan Stanley, Citigroup and Hartford. 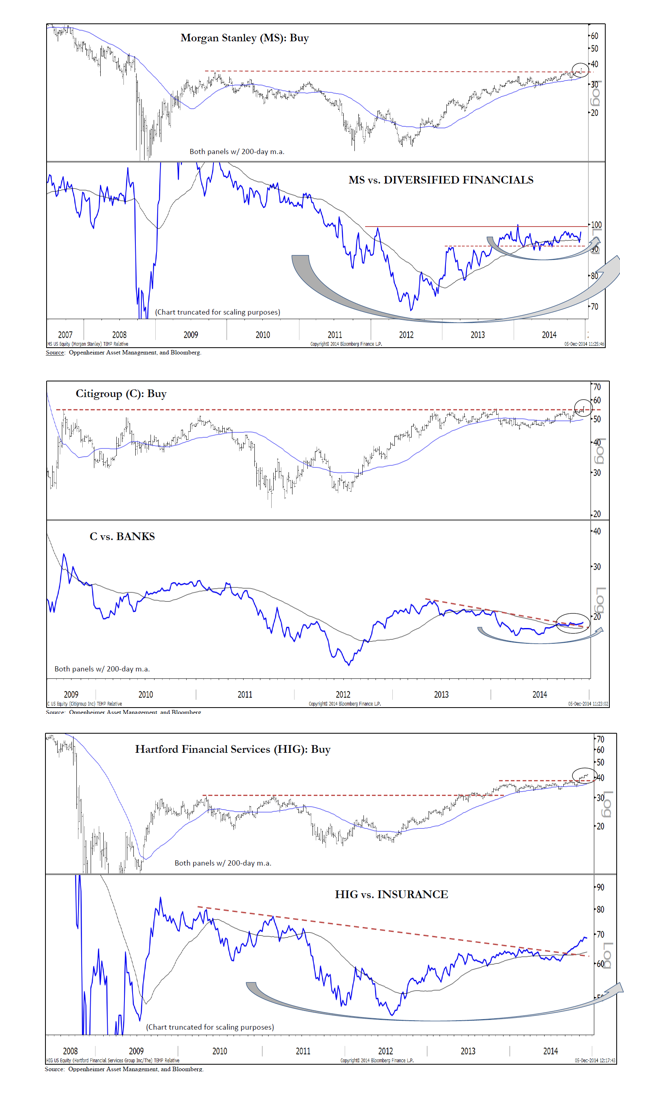