Beer remains the American favorite adult beverage. For years, it was followed by wine, while liquor trailed far behind. That changed sharply in the past year.

According to a new Gallup poll, the number of people who prefer liquor as their first adult beverage choice has caught up to wine. That is bad news for the wine industry. The United States is the largest wine consuming nation in the world. Total revenue for wine sales in the United States was over $14 billion in 2018.

The preference for liquor has grown over the past several years. Gallup reports that in its new poll, “Twenty-nine percent of drinkers name liquor as their preferred drink. That is up from 19% a year ago although similar to the 26% who said so in 2017. Despite the lower percentage measured last year, the broad trend is one of increased preference for liquor. The average percentage preferring liquor has risen from 19% in the 1990s to 21% in the early 2000s to 23% over the past five years.” The preference for wine, at 30%, is down from 35% in many recent years. The study was done among Americans aged 18 years and older.

Finally, the differences based on income are significant. Thirty-three percent of people with an income of under $40,000 prefer liquor as their top choice. Among people who have income over $100,000, the number drops to 25%. The preference for wine is 23% for those with incomes under $40,000. Among those with incomes over $125,000, the number is 35%. The split for beer is 43% for those who make less than $40,000 and 36% among those who make over $125,000. America has nearly three dozen beer brands, and the list includes some famous brands with plunging sales.

One piece of good news for the entire adult beverage industry is that 65% of Americans drink alcohol, a figure that has held steady for 20 years.

The major takeaway from the study is that beer remains king, but liquor is gaining. 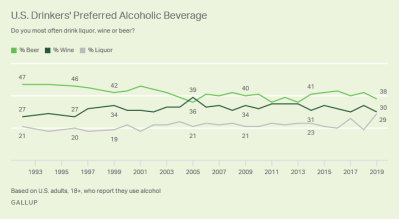