The American Clean Energy Leadership Act of 2009 included plans on how to pay for the cost of electricity transmission from projected wind farms in remote parts of the US to consumers who would benefit from the new sources of power. The Act proposes different methods of paying for the new grid capability, one of which is that costs are apportioned by benefits received. So, if a power company in New York wants to add wind generation from the Dakotas to its portfolio, that power company’s customers would pay more for the expanded grid than would residents of the Dakotas who would see less or no benefit from the upgraded grid.

Municipal utility districts from all parts of the US are lined up behind the idea that consumers who benefit are the ones who should pay more. Similarly, a group of investor-owned utilities (IOUs) including Southern Company (NYSE:SO), Alliant Energy Corp. (NYSE:LNT), CMS Energy Corp. (NYSE:CMS), Northeast Utilities (NYSE:NU), and seven others have issued statements and reports challenging both the plans for an upgraded grid and the proposed way of paying for the upgrade.

Here’s a map of the US electricity transmission grid. 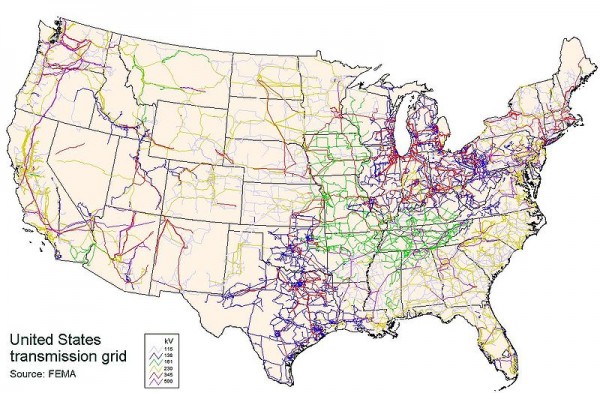 The effort to work on an upgraded grid began with the Energy Policy Act of 2005 (EPAct). One of EPAct’s provisions directed the Federal Energy Regulatory Commission to designate energy transmission corridors that would move electricity generated in remote parts of the country to population centers. The effort petered out because it was widely disliked to begin with and would have been nearly impossible to implement in the West.

In the East, where distances are shorter, but land for transmission corridors is scarcer and much more expensive, politicians and Eastern utilities feared that wind and solar generation in the West and Midwest would cause them to miss out on the economic windfall that developing clean energy promised.

The immediate proposal under discussion involves building what is called an overlay grid of extra-high voltage lines that would, in effect, be an interstate highway system for transporting electricity from its point of generation to interconnections with local distribution grids and consumers. The plan calls for a network of 765,000 kV lines at a cost of some $100-$220 billion. Currently there are no such high-voltage lines in the US. A completely upgraded US electricity grid, including the extra-high voltage lines, could top $1 trillion.

The IOUs and their allies argue that transmission lines that merely pass through a state or region without feeding electricity to that area should not be paid for by consumers in that area. If this principle is adopted, it would have a chilling effect on the development of alternative energy-generation in the remote parts of the country where the wind blows most steadily and the sun shines most consistently. Because there aren’t enough consumers in that area to absorb all the additional planned generation, it is likely that alt energy projects would be scaled back.

The IOUs also have an ulterior motive. If alternative power sources are subsidized by everyone, it threatens what is essentially a captive market for the coal-, gas-, and nuclear-fired plants these companies have either built or have on the drawing boards. The IOUs argue that subsidized transmission distorts the price signals that are inherent in rates.

In a letter to Senators Harry Reid and Mitch McConnell, a group of utility districts argue, “Transmission planning and cost allocation must support price transparency and the access to accurate cost and price information so that the power purchasers can make informed resource purchase decisions and consumers do not end up paying more than necessary.” The letter goes on, “If developers and potential customers of the new resources don’t have to pay the costs of transmission associated with their decisions, the price signal is lost and distant resources will have an unwarranted price advantage over local, less costly ways of getting to the cleaner energy future we all desire.”

The battle is already being waged in California, where a June ballot initiative would require that residents approve by a two-thirds majority any attempt by a public agency to enter the retail power business. The initiative, Proposition 16, responds to a law passed in California in 2002 that allows the establishment of a community choice aggregation program that could get public funding to enter the retail power market.

The sole sponsor of Proposition 16 is PG&E Corp. (NYSE:PCG), which has spent more than $30 million so far in support of Prop 16. If the proposition is approved, it will be virtually impossible for a local government to purchase electricity from a non-PG&E source.

The argument for spreading the cost of grid upgrades around to all consumers is also laced with special interests. Sunny states like Nevada and Arizona, and windy states like the Dakotas could generate enough electricity to power the US essentially forever. Politicians from those states know, however, that without a way to get that power to market, development will never happen.

Development means jobs and wealth and re-election, exactly what the Eastern politicians feared. A new wrinkle has developed, though, that might change the debate slightly. When Interior Secretary Ken Salazar last week approved the Cape Wind Project offshore of Massachusetts, the door was opened to similar development off the Atlantic coast. If that should happen, the wealth would get spread around more, and opposition from East coast politicians and utilities could subside.

That still leaves the IOUs and many utility districts opposed to spreading out the costs, but that issue could be addressed in a variety of ways that would satisfy everyone. That’s what politics is for, after all.

The pressing need in the US for a robust, modern grid that can reliably get electricity to where it’s needed does not admit an easy or cheap solution. The solution will cost billions of dollars and take years to build. Government policy, and money, have been driving what little has been done so far. But the most fundamental question is the one now being asked: do we let government policy drive development or is listening to the market both fairer and more likely to lead to the desired result?