Carbon Emissions Take Record Drop In The US

Since 2000, CO2 emissions have dropped by 445 million metric tons, and since 2007, the year with the highest emissions in the past decade, CO2 emissions have fallen by 585 million metric tons, almost 10%. There are two general reasons for the decline. One, fuel switching in electricity generation from coal to natural gas, and two, a recessionary economy where businesses use less energy and drivers log fewer miles.

The effects of fuel switching are measured by carbon intensity, which is the amount of CO2 emissions per unit of energy consumed, or CO2/BTU. The switch to natural gas reflects the lower price of natural gas compared with coal. Electricity generators such as Duke Energy Corp. (NYSE:DUK), American Electric Power Co. (NYSE:AEP), and the Southern Company (NYSE:SO) all use natural gas in their peaking plants and the few plants that still burn oil to deliver peak power are being converted to natural gas. Duke is also building a new intermediate natural gas-fired plant.

Electric power generation recorded the steepest fall in carbon intensity of any sector measured by the EIA. In 2009, carbon intensity in electric power fell 4.3% year-over-year due to fuel switching. Coal prices rose nearly 7% and natural gas prices fell by almost half. Because natural gas only emits about 55% as much CO2 as coal, burning natural gas significantly reduces overall CO2 emissions even when gas generates only a fairly small percentage of the nation’s electricity supply.

Consumption of transportation fuel has also fallen sharply in the past three years, by more than 1,000 b/d between 2007 and 2009. Fuel economy has also improved to an average 28.5 miles per gallon in 2009. Even lower fuel prices throughout most of 2009 did not boost demand for gasoline.

Demand in the industrial sector fell most of all from 2000 levels. Demand spiked in the computer and semiconductor industry in early 2008 and has fallen sharply since then. The primary metals industry, including steel makers like Nucor Corp. (NYSE:NU) also experienced a sharp drop beginning in 2008, primarily resulting from a drop in demand from auto makers. Since 2000, industrial output has fallen almost 34%, with virtually all the drop coming since mid-2008.

Unfortunately, the severe recession was chiefly responsible for the drop in energy use and CO2 emissions. That is not a good strategy, and not one that the US can build on to meet President Obama’s stated goal of reducing greenhouse gas emissions 17% below 2005 levels by 2020.

Because the economic recovery is expected to be fairly slow, especially after the effects of the stimulus bill get behind us at the end of the second quarter of 2010, these emissions numbers may not shoot back up as they might if the economy rocketed off again. It could be a good time to adopt new legislation on emissions and climate change. However, there will also be pressure to avoid imposing any new emissions regulations that could impede economic growth. The political fight has provoked only a few skirmishes so far, but pitched battles are looming.

The following chart from the EIA report shows the relationship between GDP and energy-related CO2 emissions for the past 20 years. 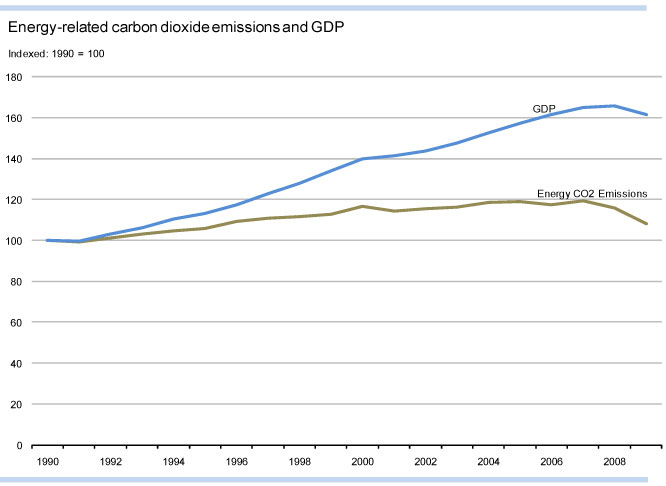 The gap has widened as the US economy has grown its service sector faster than its industrial and manufacturing. Ironically, manufacturing job growth is now actually helping the economic recovery in the US, though it’s unclear how long that will last or how much help it will ultimately be. Still, no politician will want to be accused of stomping on a recovery during an election year.

In the end, most people are likely echo St. Augustine: let’s halt CO2 emissions and climate change, just not yet.

Sponsor: 5 best investments for 2010 – The next nine months represent a bold new era for investors.