Since 2002, Greenland has issued 13 licenses to explore its onshore and offshore areas for oil and gas. Among the licensees are Exxon Mobil Corp. (NYSE: XOM), Chevron Corp. (NYSE: CVX), Encana Corp. (NYSE: ECA), Britain’s Cairn Energy, Canada’s Husky Energy, and both Danish and Greenlander national oil companies. Statoil ASA (NYSE: STO) drilled a dry well in 2000, one of seven failures to find oil over the past 30 years.

Greenland, which is a dominion of Denmark and receives more than $10,000 per person from the Danish government for each of its 56,000 inhabitants, has long been thought to hold significant amounts of oil off its shores. The land mass itself is virtually covered by ice, as the following map shows. 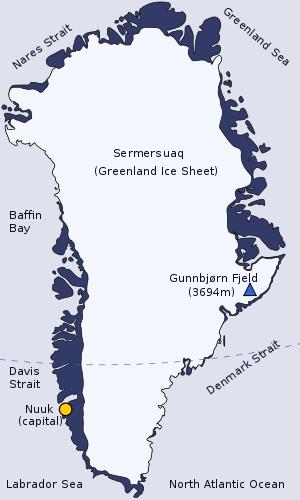 Knowledge of Greenland’s reserves is sure to grow this year as Cairn Energy begins a systematic geological mapping of the potential fields and drills four exploratory wells in the offshore West Disko field, with the first expected in late July. Disko is the largish island about midway up the west coast of Greenland.

The new flurry of activity in Greenland is the result of warming temperatures that are melting the country’s ice cap and moderating the severe winters that usually freeze the surrounding ocean to a depth of more than three feet. As the region becomes more accessible, more surveying and exploration will occur.

Of course the recent disaster in the Gulf of Mexico involving BP plc (NYSE: BP) and its contracted driller Transocean Ltd. (NYSE: RIG) focuses attention on the fragility of the Greenland ocean environment which is the home to whales and walruses. The country also hosts a thriving fishing business which fisherman are naturally reluctant to endanger.

Those concerns, though, might be trumped by the desire of Greenlanders to gain full independence from Denmark. Oil revenues would play a big part in that, so the locals are heavily in favor of development. Greenland is auctioning 14 blocks (about 90,000 square miles) in Baffin Bay this August, in an area where onshore rocks have been observed seeping oil. The government expects to claim more than 50% of all revenues through taxes, royalties, and participation by the country’s national oil company. One big producing field would easily replace the $600 million or so the country now gets from Denmark.

That still leaves more than 40% for the companies that do the work, and there is no better deal available anywhere else in the world. In Iraq, for example, oil companies are not being allowed to share in production, but are being paid a flat per barrel fee above costs. And the per barrel fees are not hefty, ranging from about $1.40-$2.30 per barrel.

Other political issues could arise from claims made by Russia, Norway, Canada, and the US on the seafloor inside the Arctic Circle. In 2007 Russia even sent a submarine to plant the country’s flag on the seafloor. If further exploration of the area delivers on its promise, it is inevitable that tensions among the competing nations will rise.

Currently, Greenland’s state oil company, Nuna Oil, employs just seven people, only one of whom is a geologist. If further surveys and exploration validate the reserves estimate of 50 billion barrels (more than all the oil extracted from the North Sea in the past 40 years), Nuna Oil will be hiring a few more people.