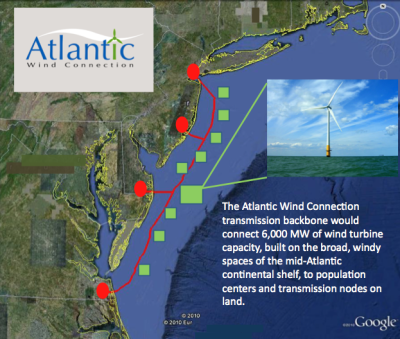 Google (NASDAQ: GOOG) will be one of the major investors in a massive wind farm project on the East Coast. It is hard to see how the search engine company will make money on the project, as is true of many Google initiatives.

Google said in a blog written by Rick Needham, Green Business Operations Director, “We just signed an agreement to invest in the development of a backbone transmission project off the Mid-Atlantic coast that offers a solid financial return while helping to accelerate offshore wind development—so it’s both good business and good for the environment.”

The Atlantic Wind Connection will stretch from New Jersey to Virginia and will be able to connect 6,000 MW of offshore wind turbines. Google says that is  “equivalent to 60% of the wind energy that was installed in the entire country last year and enough to serve approximately 1.9 million households.”

The AWC project is led by independent transmission company Trans-Elect and is financed by Google, Good Energies and Marubeni Corporation. “We are investing 37.5% of the equity in this initial development stage, with the goal of obtaining all the necessary approvals to finance and begin constructing the line,” Google said. Estimates for the entire cost of the project over its life are as high as $5 billion.

Many of the wind turbines will sit up to 15 miles offshore.

The project may be good for America and good for the wind turbine industry, but how is it good for Google and its shareholders? Google has been an advocate of green energy for some time.  Its huge server farms use massive amounts of electricity, but the new wind farm project probably will not bring down Google’s energy costs.

Investors in the search engine company have repeatedly questioned why Google puts money into projects such as Google Images, Android, and self-directed cars. These programs seem to have absolutely no financial return. Google’s shares are up only 3% over the last year, a much worse return than the Nasdaq has given. The firm’s core search advertising business no longer grows as quickly as it once did.