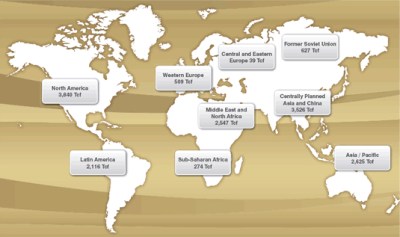 Oil supermajor Chevron Corp. (NYSE:CVX) has announced that it will acquire Atlas Energy Inc. (NASDAQ:ATLS) for $3.2 billion in cash and will take on an additional $1.1 billion in existing debt owed by Atlas, one of the major players in the Marcellus Shale natural gas play in Pennsylvania. Atlas shareholders will receive $38.25/share

in cash plus a pro-rated share of 41 million units of Atlas Pipeline Holdings, L.P. (NYSE:AHD). The Atlas Pipeline units are valued at $5.09/unit, bringing the total per share payout to Atlas Energy shareholders to $43.34/share.

The Marcellus shale play is one of the most productive shale gas regions in the US, and its location near the population centers of the eastern seaboard makes it an even better location. Exxon Mobil Corp. (NYSE:XOM) spent more than $40 billion to acquire the natural gas assets of XTO Energy, about 17% of which are located in the Marcellus shale. About half of Atlas’s daily production comes from the Marcellus shale.

Last April Atlas concluded a joint venture deal with India’s Reliance Industries under which Reliance agreed to pay about $340 million in cash in exchange for 40% of Atlas’s Marcellus shale production and to spend up to another $1.36 billion over the next five and a half years to pay for additional drilling. In today’s announcement, Chevron said that it would assume Atlas’s role as operator of the joint venture and maintain its 60% participation in the deal. Reliance has agreed to continue with its part of the deal as well.

First the Exxon acquisition and now the Chevron purchase underscore the growing importance of natural gas to what we’ve always thought of as “Big Oil.” Adding trillions of cubic feet of natural gas to Exxon’s, and now Chevron’s, reserves is really the only way for these companies to replace their annual production. And because oil companies depend so heavily on reserves replacement to prop up share prices, adding barrels of oil equivalent in the form of natural gas is necessary.

The current low prices for natural gas will weigh on Chevron’s acquisition, just as they have on Exxon’s. But that’s a short term problem that will work itself out over time. Failing to replace production is a far more serious problem for both Exxon and Chevron.

Chevron shares have dropped about -1.3% this morning on heavy volume. Atlas shares are up about 33% on more than 15 times normal volume. As if in support of the Chevron-Atlas tie-up, the United States Natural Gas ETF (NYSE:UNG) is also up about 1% this morning.