Ever the consummate pitchman, Chesapeake Energy (NYSE: CHK) Chairman and CEO Aubrey McClendon has promulgated in print and on television that its Utica Shale strike will be the catalyst to higher stock prices. For all his rodomontade, the natural gas provider remains dependent on Haynesville/Bossier Shale production from wells in northwest Louisiana and East Texas for revenue and profits.

The Utica Shale could be worth $500 billion, and the “biggest thing economically to hit Ohio, since maybe the plow,” McClendon recently told an audience in Ohio, according to a report by Natural Gas Intelligence. To Chesapeake shareholders, the company noted in its second-quarter financials that the supposed liquids-rich play conservatively “could be worth $15 – $20 billion in increased value.”

Chesapeake’s business strategy has long been to create value for investors by developing unconventional resource plays onshore in the U.S., first, by building regional scale through lease acquisitions and then growing production and proved reserves through the drill-bit. In tandem, the company has amassed some 1.25 million net leased acres (at a cost of roughly $2 billion) in the Utica Shale, mostly in eastern Ohio.

McClendon (and by definition, Chesapeake) brags that proved reserves grew by 2.74 tcfe in first-half 2011 to 16.5 tcfe, at an average drilling and completion cost of only $1.29 mcfe. These numbers are misleading, however, as the company capitalizes whatever expenses it (reasonably) can, from land acquisition costs to drilling and pipeline expenses. 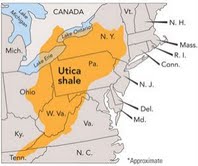 Although it is named after an outcrop in Utica, New York, drillers believe the richest hydrocarbon reserves from the Utica Shale play will be found in eastern Ohio, where Chesapeake has concentrated its holdings. Spudding activity is being directed 2,000 feet to 7,000 feet beneath the prolific gas-trappings of the Marcellus shale.

For the three-months ended June 30, production from the liquids-rich Eagle Ford Shale of South Texas did deliver an average sales price of $8.34 per mcfe, compared to $3.41 from natural gas fields of Haynesville.

The nation’s second largest natural gas producer, after Exxon Mobil (NYSE: XOM), is aggressively positioning itself to derive 30% of total output from liquids by 2015:

In the June quarter, 16% of production in second-quarter 2011 came from oil and natural gas liquids (NGLs), helping to pull the average natural gas (equivalent) sales price up from $3.26 to $4.61, according to regulatory filings. Hedging activities helped to offset weak natural gas prices too.

To date, however, Eagle Ford remains more hype than hope. Volume from the region totaled a mere 1% of quarterly output of 277.5 bcfe.

Last month the company disclosed better-than-expected results from four wells (three wet gas and one dry gas) drilled in the Utica play. Of note, the Buell well, which sits in a wet gas window of Harrison County, Ohio, achieved a peak rate of 9.5 million cubic feet per day of natural gas and 3,010 barrels of oil equivalent per day (three times initial assays).

Notwithstanding McClendon’s proclivity for bravado and speculation — anyone remember his requisite sale of 33.4 million shares of company stock back in October 2008 to meet a margin call? — it is premature to extrapolate any real value from such early data.

Canadian-based Talisman Energy (NYSE: TLM) has been prospecting leaseholds in the Utica play since 2009, mostly in the Quebec province. To date, operating results have been disappointing, with decline rates falling significantly after the first 30-days, according to Jeffries & Co.

Chesapeake has downplayed the technical challenges of extracting hydrocarbons from Utica. Hurdles to developing reserves in the region include a dearth of pipeline and processing capacity, little delineation of actual reserve potential, and less fruitful responses to hydraulic fracturing techniques due to dissimilar geology than nearby Marcellus, according to the Oil & Gas Financial Journal.

Developing low cost reserves in Utica likely will mirror results in Eagle Ford — slower than initial optimistic forecasts. Chesapeake’s telling of itself as an oil volume growth story is more fiction than fact. Notwithstanding best efforts, the company remains dependent on natural gas output from the likes of Haynesville/Bossier wells. In quarter-ending June 30, Chesapeake derived 36%, or 98.6 bcfe, of total production from these two shale regions, up from 21%, or 52.1 bcfe, in the prior year.