Kayne Anderson Energy Total Return Fund Inc. (NYSE: KYE) had over $1.627 billion in investments as of October 31, with many large MLP holdings. Kinder Morgan Management was listed as 2.438 million units, worth $232 million, with a 14.3% weighting of the long-term investments. Kayne Anderson’s October 31 holdings also stated:

The ClearBridge Energy MLP Fund Inc. (NYSE: CEM) closed-end fund had over $3.2 billion in total investments at the end of October. Kinder Morgan Management units were listed as the third largest holding in the fund, being worth $227.5 million, or 7.0% of the total weighting.

The ClearBridge Energy MLP Total Return Fund Inc. (NYSE: CTR) closed-end fund counts some $1.4 billion in total investments. Kinder Morgan Management was listed as the third largest holding of the fund, worth some $79.3 million at the end of October, with an investment weighting of 5.6%.

The ClearBridge Energy MLP Opportunity Fund Inc. (NYSE: EMO) closed-end fund had $1.275 billion in total investments as of October 31. Kinder Morgan Management units were the second largest holding, worth $73.9 million, or about 5.7% of the total fund weighting.

The ClearBridge American Energy MLP Fund Inc. (NYSE: CBA) closed-end fund had over $1.51 billion in total investments, and Kinder Morgan Management was the sixth largest position, worth some $86.4 million and with a 5.5% total weighting.

It would seem as though the closed-end fund universe has a more flexible structure than the ETF and ETN universe. Here are some, but not all, of the additional closed-end funds with soon-to-be or existing Kinder Morgan exposure to consider, with assets listed, as follows:

Kinder Morgan will be one of the largest oil and gas players in the nation after this merger. At the time of the merger announcement (i.e., before the price of oil tanked), Richard Kinder said that its dividend payment would rise to a projected level of $2.00 a share in 2015 (versus about $1.72 in 2014), and he forecast that the combined structure will grow that dividend payout by about 10% a year from 2015 to 2020.

How closed-end funds and ETFs that track MLPs will treat the new Kinder Morgan ahead does matter. The ETFs generally track an index, and the rules are more strict on their holdings, although most MLPs say that they will hold up to 90% of their total assets in securities of the underlying tracking index. Closed-end funds in general have a more flexible structure. They generally measure performance against the same indexes that exchange traded funds and notes use, but their investment policies generally allow for a larger degree of portfolio manager decisions.

That being said, the ETFs and ETNs will have a harder time justifying holding a C-corporation structure than will closed-end funds. The path of least resistance from the closed-end funds will be to hold the shares of Kinder Morgan after the merger — at least while they get used to dealing with such a large entity within the portfolio that isn’t an MLP.

We have included an infographic showing what the newco post-merger Kinder Morgan will look like. 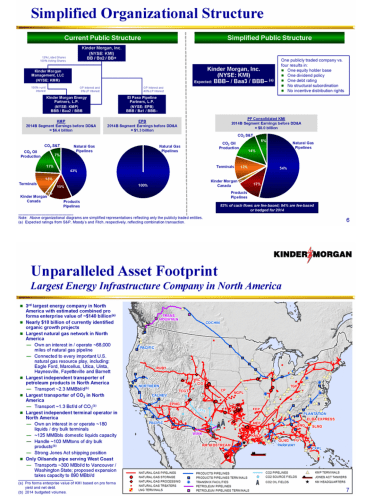