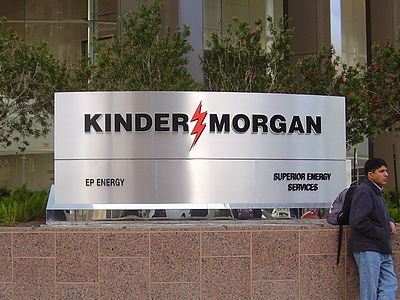 Source: Wikimedia Commons
It is no secret any longer that the world of oil and gas has been shaken to the core now that oil has fallen from over $100 to under $50. Still, the oil and gas sector, and the infrastructure, remains a focus for many investors who are looking for long-term opportunities in the oil patch. Now that Kinder Morgan Inc. (NYSE: KMI) has shed its official master limited partnership (MLP) structure, and now that its earnings came with another dividend hike, some oil and gas investors might wonder if this becoming the perfect oil stock for 2016 and beyond.

24/7 Wall St. has gathered several key analyst research reports, but first look is on how the actual earnings turned out and what Kinder Morgan is doing to be able to keep raising its dividend. Also, keep in mind that these are now real dividends — this is no payout from an MLP that includes a return of capital that juices up a payout.

Kinder Morgan’s first-quarter earnings were $0.22 per share (EPS) on revenues of $3.6 billion. In the same period a year ago, it posted EPS of $0.28 on revenues of $4.05 billion. Consensus estimates from Thomson Reuters were $0.23 EPS on revenues of $4.55 billion. Richard Kinder indicated that current project backlog of expansion and joint venture investments is $18.3 billion.

On how Kinder Morgan has a high dividend, the firm’s distributable cash flow (DCF) is a non-GAAP measure that is roughly comparable to net income. This DCF is Kinder Morgan’s preferred measurement of comparing basic cash flows to the cash dividends it expects to pay shareholders — as it is coverage in excess of dividends. DCF for the first quarter totaled $0.58 per share, up from $0.55 in the year ago quarter.

Merrill Lynch’s energy team reiterated its Buy rating with a $49 price objective. The firm also said that Kinder Morgan continues to be one of its top picks in the midstream energy sector and said that it is on the Bank of America Merrill Lynch US1 list. Merrill Lynch further said that the $0.48 dividend was a tad under its own model of $0.485, but management reiterated its 2015 dividend guidance of $2.00 and a 2015 to 2020 growth target of 10%. Despite some other issues, the firm said:

We view Kinder Morgan’s financial flexibility positively given our view that it may be active on the M&A front and ATM (at the money stock) issuances may have a less negative impact on Kinder Morgan’s share price. We project Kinder Morgan will issue $500 million per quarter through its ATM for the remainder of the year. … We recognize Kinder Morgan’s long-term 10% DPS CAGR depends on continued execution of its project backlog, supplemented by acquisitions. However, Kinder Morgan’s diversified asset footprint, particularly in natural gas/products pipelines, coupled with KMI’s structural advantage and veteran management team supports our Buy rating.

Credit Suisse maintained its Outperform rating on Kinder Morgan. Still, it raised the price target to $52 from $50 in its call. The firm’s John Edwards lowered (earnings) estimates and said that first quarter discounted cash flow is on track to meet $2.00 per share in the divided budget. The firm trimmed estimates on a miss, with segment Earnings before DD&A coming in at $1.912 billion, versus the firm’s own target of $2.063 billion.

Perhaps Goldman Sachs regrets having removed Kinder Morgan from its Conviction Buy List just a week ahead of the earnings report. Shares were at $41.99 then.

If investors just use the current payout on an annualized basis, the dividend yield is just under 4.4%. If they use the $2.00 budgeted ahead for the dividend, then they might be looking at closer to a 4.55% yield.

So, is Kinder Morgan now the perfect stock for oil and gas investors? If investors had a vote, they might say yes. They might even give a resounding “Yes” on that topic. At $44.00, Kinder Morgan shares have hit a 52-week high and an all-time high. The stock has a consensus analyst price target of $47.30 and its highest price target is up at $54.

Not many oil companies, even in infrastructure and in MLPs, can claim to be at 52-week and all-time highs right now. In this $50-ish oil environment, that is more than impressive. Maybe Kinder Morgan has become the perfect energy stock for investors.