The U.S. Department of Transportation’s Federal Highway Administration produces a monthly report on U.S. traffic volume that can be stunning when you first see the numbers. For example, the agency estimates U.S. drivers will travel a total of 1.014 trillion miles on the country’s roads and streets this year. That’s about 0.2% more than the 2017 estimate, the first to top a trillion miles.

Here’s a chart from Kemp that shows how miles driven slows as gas prices rise: 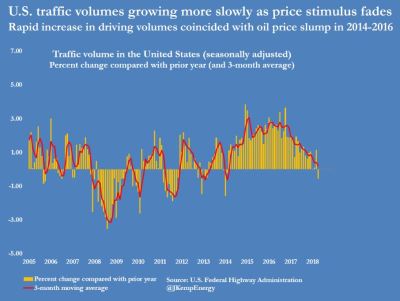 Kemp also has a chart that correlates traffic volume with gas prices. The yellow line in the chart represents gas prices and the scale is inverted: 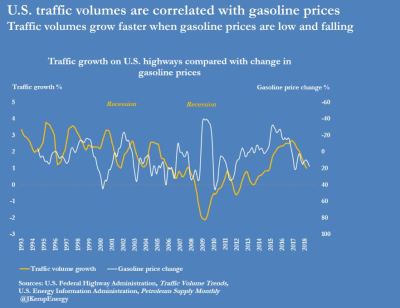 Manufacturers are designing and building smaller, more fuel-efficient engines for their bread-and-butter light trucks in an attempt to give consumers the vehicles they want with the fuel efficiency they are showing signs of wanting. New engines that shut off some of the cylinders paired with multi-gear (6-, 8- or 10-speed) transmissions will be available in some pickups beginning next year.

Regardless of the president’s demand that OPEC lower prices now, those new engines will reduce demand for petroleum and help the oil market stay in supply-demand balance — further proof that the best remedy for high prices is high prices.

Kemp’s full set of charts is available from Reuters.