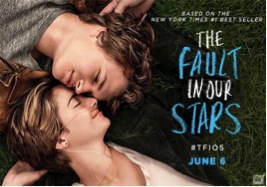 Source: FOX
If you had told executives a decade ago that a teen drama based on a young-adult book would be the favorite over a Tom Cruise action film going into a summer weekend, the odds are good you would have been laughed at. And yet that’s the scenario studios are looking at as The Fault in Our Stars is expected to top Edge of Tomorrow at the box office this weekend.

Rising ‘Stars’
The Fault in Our Stars isn’t your ordinary teen drama, as it stars one of the industry’s hottest young “it” actresses and is adapted from a book that appeals across multiple demographics. Produced for just $12 million, the movie is expected to clear around $35 million during its first three days and that number could go higher.

Starring Shailene Woodley, the movie centers on two teens whose lives have been touched by cancer who bond after meeting at a support group. It’s an emotional sucker-punch of a plot that has been hailed by the literary community and now looks to win over movie audiences as well.

Stars also has the ability to appeal to audiences looking for a break from the typical summer popcorn fare, and in the past that type of crowd has helped drive a film to higher profitability.

For distributor Fox (NASDAQ: FOXA), this is likely the lowest-budgeted movie on its summer slate, but easily one of the most anticipated. The studio is coming off the success of X-Men: Days of Future Past and has How to Train Your Dragon 2 ready to soar next weekend. The Dragon sequel (produced with DreamWorks Animation) is widely expected by analysts and investors to have the same level of success as the original, which means Fox could have three big hits debut over a four-week timespan.

This is a huge deal for the studio and having the stars align (no pun intended) in such a way is something rival studios would be jealous of this summer.

‘Edge’ of Disaster?
Meanwhile Warner Brothers (a subsidiary of Time Warner (NYSE: TWX)) is not having a good few weeks, with the under-performance of the Adam Sandler/Drew Barrymore movie Blended and the news that the Wachowskis’ upcoming Jupiter Ascending is being pushed from next month to next year.

This weekend may not be easier for the studio’s top brass as Tom Cruise’s action/sci-fi movie Edge of Tomorrow will hit theaters and if global audiences are any indication, it could be a rough reception. Cruise’s bankability has declined in recent years and the majority of his films have been bailed out by foreign receipts. Tomorrow’s already opened in a number of overseas markets and netted just $20 million over its first weekend, although that has grown this week to $33 million after coming in strong in key markets.

Still, even with international earnings growing, early estimates have the film opening stateside at around $25 million to $30 million and missing the top spot. The numbers could fluctuate if word of mouth continues to be solid, and the studio really needs that to be the case. The movie cost $178 million to make, so to not cross $100 million domestically would be bad for Warner Brothers, which started the summer off so well with the surprise mega-success of Godzilla.

What makes things even more interesting, though, is that if critics hated Tomorrow it would be one thing, but so far…they love it. At the time of writing this article, the movie had an 89% rating on Rotten Tomatoes, which is Cruise’s highest rating since 2011’s Mission Impossible: Ghost Protocol and his highest for a non-franchise film since 2001’s Minority Report.

Many have tied the film’s early poor tracking to problems with its marketing campaign. To the average moviegoer, the marketing makes it look like a Groundhog Day re-tread with a very violent sci-fi bent. Yet critics have said there’s more to it than that, but that’s because they’ve actually seen the film. Persuading audiences to pay for the experience will likely be harder. Things have been looking up the last few days, though, and the movie could surprise pundits. But it will likely still finish in third behind The Fault in Our Stars and Disney’s (NYSE: DIS) Maleficent.