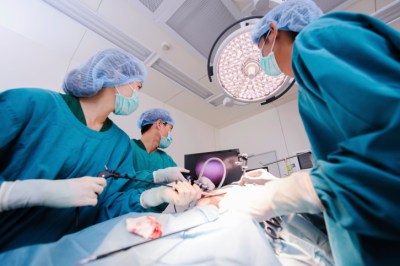 Source: Thinkstock
With earnings season beginning, the top Wall Street firms we cover are starting to handicap the likely winners and losers. With a pricey market and plenty of companies already ratcheting down estimates before they release, those that beat earnings estimates could be looking for a big jump in price. In a new research report, Cowen analysts focus on three life science stocks that they think could beat current consensus estimates.

The Cowen report indicates that the universe of stocks they cover have outperformed the market so far this year, and three may be poised to come in with results higher than current Wall Street estimates. The three are Affymetrix Inc. (NASDAQ: AFFX), Myriad Genetics Inc. (NASDAQ: MYGN) and Quidel Corp. (NASDAQ: QDEL).

Affymetrix technologies enable multiplex and simultaneous analysis of biological systems at the cell, protein and gene level, facilitating the rapid translation of bench-top research into clinical and routine use for human health and wellness. The company provides leadership and support, partnering with customers in pharmaceutical, diagnostic and biotechnology companies, as well as leading academic, government, and non-profit research institutes, in the quest to use biology for a better world. More than 2,300 microarray systems have been shipped around the world and more than 94,500 peer-reviewed papers have been published citing Affymetrix technologies.

ALSO READ: 4 Big Pharmaceutical Stocks to Buy for the Rest of 2015

The Cowen team thinks that company can beat current expectations for the quarter. They also think that the three-times sales multiple applied to the stock can expand with increasing Wall Street confidence. The Wall Street earnings per share estimate for the March quarter is $0.04, on revenues of $87.16 million.

Cowen has the stock rated at Market Perform with a $12 price target. The Thomson/First Call consensus target is at $11.88. The stock closed above both targets yesterday at $12.83 up over 2.5%.

Myriad Genetics announced late last year that it has signed an expanded companion diagnostic agreement with AbbVie, a leading global bio-pharmaceutical company, to use Tumor BRACAnalysis CDx as a companion diagnostic in support of AbbVie’s novel poly (ADP-ribose) polymerase or PARP inhibitor, veliparib. The collaboration builds on Myriad’s previous agreements with AbbVie, under which the company is providing the testing to support several of AbbVie’s ongoing Phase 3 clinical studies of metastatic breast cancer.

Short sellers have targeted the stock in the past, and a stunning 54% of the float was sold short as of March 13. The Cowen analysts think the company could beat fiscal third-quarter expectations, and that could lead to a third straight quarter of organic earnings growth. The consensus estimates are for $0.39, on revenues of $183.1 million.

Quidel provides diagnostic solutions that can lead to improved patient outcomes and provide economic benefits to the health care system. Marketed under the QuickVue, D3 Direct Detection and Thyretain leading brand names, as well as under the new Sofia, AmpliVue and Lyra brands, Quidel’s products aid in the detection and diagnosis of many critical diseases and conditions, including, among others, influenza, respiratory virus, Strep, herpes, pregnancy, thyroid disease and more.

The company posted strong fourth-quarter results in February, and the Cowen analysts see the company beating first-quarter estimates on strong flu and non-flu results. The consensus estimates are for $0.12 per share on revenues of $61.2 million. It should be noted this company also has a very high short interest, with 26% of the float short.

With massive short interest in some of these stocks, a strong earnings beat could send them soaring. It should be noted these trades would only be suitable for extremely aggressive accounts.