How to Survive a Potentially Deadly Riptide

Since the beginning of this week, two Americans have drowned after having been caught in powerful rip currents off the coast of Florida. One was a 19-year-old recent high-school graduate vacationing with her family, and the other was a 53-year-old father of four from Tennessee who rescued three of his four daughters before succumbing to the powerful current.

Every year, more than 100 people die after being swept up in rip currents along America’s coastlines, according to the U.S. Lifesaving Association. The association of beach lifeguards also estimates that about 80% of beach lifeguard rescues are related to swimmers caught in rip currents. So far in 2019, the U.S. National Oceanographic and Atmospheric Administration (NOAA) has attributed logged 28 deaths along U.S. coasts, more than half of which have been attributed to rip currents.

Rip currents, often called riptides or undertow, are powerful currents that move away from the shore. According to researchers at the University of North Carolina, these currents are present every day but are so weak that no one notices them. For about four or five days a year, though, the currents are strong enough to threaten unwary swimmers with drowning.

The deadly currents can form on any beach with breaking waves, including those along the U.S. Great Lakes, and form most often at low spots or breaks in sandbars and near structures like piers and jetties. Rip currents may be difficult to spot, but there are several signs for swimmers to look for.

First, look for a break in the pattern of incoming waves. The following photo from NOAA shows a rip current. 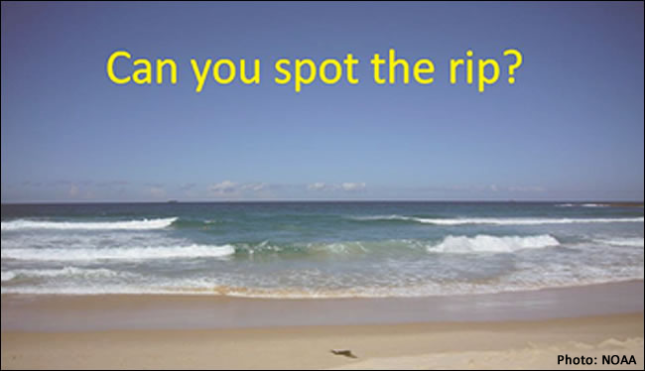 Other signs that a rip current is present include a channel of churning, choppy water, an area where the water’s color is distinctly different and a line of foam or other flotsam moving steadily out to sea. An image gallery from the University of Delaware’s Sea Grant College illustrates what to look for.

To get out of the rip current, swim parallel to the shore, even if the force of the current is pushing you further out from shore. Do not try to swim against the current directly toward the shore.

If you can’t get out of the current, float or tread water until the force of the current weakens and you can escape by swimming back toward shore. If you aren’t able to reach the shore, wave your arms and call for help. 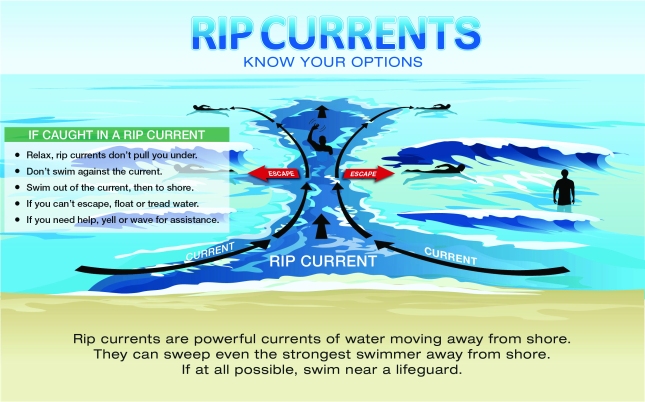 The lifeguard association provides these tips for people who are planning visits to the beach: know how to swim; never swim alone; swim at beaches with lifeguards; and, perhaps most important, “if in doubt, don’t go out.”

Learning how to spot and avoid rip currents helps ensure that you aren’t among the 10 people who drown every day in the United States. Drowning is the third leading cause of unintentional injury death. It may be surprising to find out that it takes only 60 seconds — as as little as 20 seconds for a child — to drown. Here are other water safety facts and myths you should know.

24/7 Wall St.
The Biggest Cruise Ships in the World