The data was reported on Monday in a study published at the Health Affairs website that was conducted by researchers from the University of Michigan Medical School, Michigan State University School of Criminal Justice, and the University of Pittsburgh Graduate School of Public Health. The researchers combed through state-level data maintained by the U.S. Centers for Disease Control and Prevention (CDC). They extracted available data for firearm-specific deaths and mortality rates by subpopulations based on sex, race/ethnicity, and age.

The CDC suppresses data when counts are less than 10, so the results are affected by the missing data. The study also does not consider nonfatal firearm injuries, and the researchers had to interpolate some data. The primary focus of the research was the sharp increase in firearm deaths in the three-year period compared to the previous 15-year span. The authors note: “Theoretically, this increase could have arisen from random variation. However, the consistency we found across states and subpopulations makes that possibility less likely.”

The following chart from the study illustrates the sharp increase in firearm deaths of the period from 1999 to 2017.

The next chart illustrates firearm mortality by sex, race/ethnicity and mechanism of death. 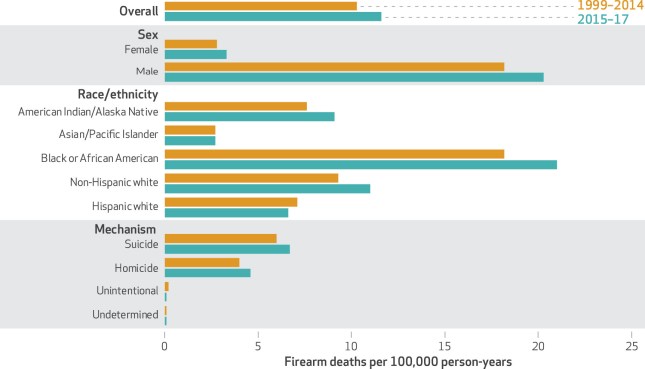 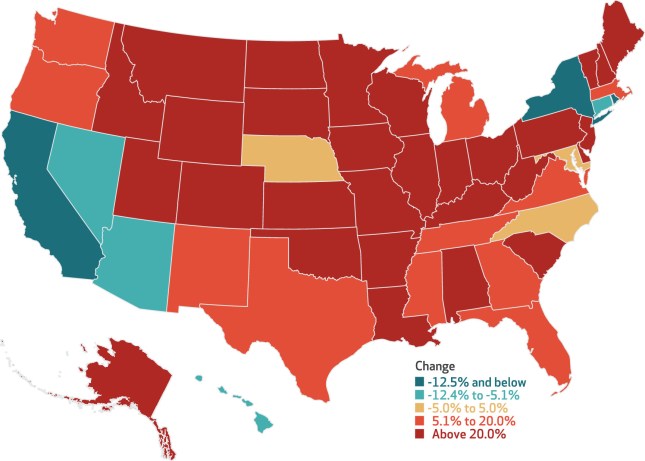 The researchers noted one common feature among 21 states. All showed marked increases in mortality between the two periods, and the increase “was reflected to varying degrees across demographics and mechanisms of death. This suggests a worsening epidemic of firearm mortality that is geographically and demographically broad.”

They also note that “suicide remains the most common mechanism of firearm mortality in most states, and the availability of a firearm dramatically increases the lethality of a suicide attempt.” In areas with higher rates of mental health problems that may lead to suicide (substance abuse, for example), subpopulations at higher risk of suicide attempts (males and the elderly, for example) and people who live in rural areas where suicide risk is higher “might consider suicide-specific prevention strategies.”

Women, who have a higher risk of firearm mortality due to domestic violence, may benefit from restrictions on firearm sales to domestic violence offenders or people convicted of violent misdemeanors. Likewise, limiting access to firearms by children corresponds to lower suicide and accidental deaths among this subgroup.

Ultimately, the authors conclude, “The epidemiology of firearm violence is complex and varies based on the mechanism of death, demographic group under study, and regionally specific culture, making a one-size-fits-all solution inappropriate.”

The full study along with supplementary data and charts is available (for a fee) at the Health Affairs website.

For further analysis on the subject, 24/7 Wall St. has published an analysis of gun violence by city. Is your city on the list?